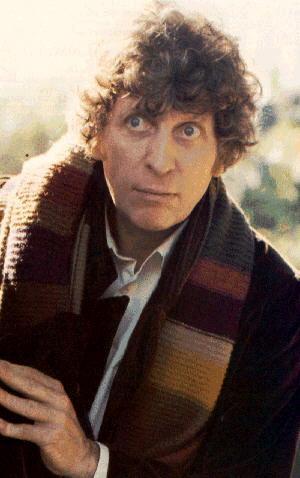 Tom Baker played The Doctor for seven years – still the longest run by any one actor to play the part. However, every season his line-up of companions changed slightly, which kept things interesting. I will try to keep my recommendations short, but still include all of his companions. I would also say that Tom Baker’s first and last season’s are definitely his best, and if you are a New Who fan who wants to dip into Classic Who – you can’t go wrong with picking up all of Tom’s First and Last seasons, and a few outstanding episodes like “Pyramids of Mars” and “City of Death”.

The Ark in Space is one of my favorite Tom Baker stories. The Doctor, Dr. Harry Sullivan (Ian Marter), and Sarah Jane Smith, land, in the TARDIS on an automated space station, that is carrying the remainder of humanity – who are in suspended animation waiting for their wake-up call once the planet has recovered from solar flare damage. But a space-faring insect life-form called the Wirrrn has gotten into the station’s systems and started to wreck havoc. Despite some very low-budget special effects and make-up – this is a wonderful story, and it includes Tom Baker’s Doctor’s fantastic “Indomitable” speech:

“Homo Sapiens! What an inventive, invincible species.  It’s only a few millions years since they’ve crawled out of  the mud and learned to walk.  Puny, defenseless, bipeds.  They’ve survived flood, famine and plague, they’ve survived cosmic wars and holocausts, and now here they are, out among the stars, waiting to begin a new life, ready to outsit eternity.  They’re indomitable!  Indomitable!” –The Doctor (Tom Baker), “The Ark in Space”, BBC 1975 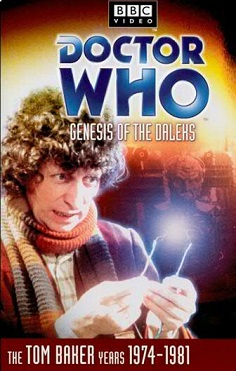 The Time Lords send the Doctor, Harry, and Sarah Jane to Skaro to destroy the Daleks or alter their development in some way. On Skaro, the Doctor meets Davros, the creator of the Daleks, for the first time. The story, despite some wandering around (it is a 6 parter), is extremely strong because it’s about moral choices. Again, I cannot recommend it highly enough.

Pyramids of Mars is another Classic episode that I really love. Set in 1911, in an isolated manor house, it has elements of Classic Horror (yes, there are mummies), English cozy mysteries (most of the guest cast dies), and it’s just about perfect.  Sarah actually changes into era-appropriate clothing, so she’s wearing a white, Victorian-styled dress throughout the story. And although most of the story does take place in 1911, the Doctor also takes Sarah to alternate time and to Mars. It is simply an awesome story – highly recommended. 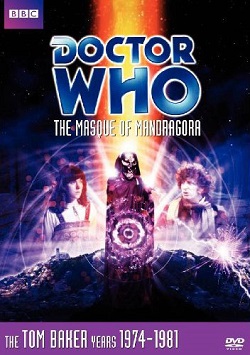 The Doctor is showing off another TARDIS control room to Sarah when the TARDIS is drawn off course by the Mandragora Helix – a malevolent alien energy. They land in 15th century Italy, and become involved in court politics. The Court Astrologer is also involved in the cult of Demnos and tries to use the Mandragora Helix energy to his own devices. This episode mixes historical settings with wonderful, rich costumes, with an science fiction plot – something Classic Doctor Who did extremely well.

Having dropped Sarah off at the end of the previous episode (Hand of Fear) the Doctor heads to Gallifrey, his home planet on his own. On Gallifrey, the Doctor tries to prevent the assassination of the President of Gallifrey, but he is too late. Accused of the crime, the Doctor dodges the accusation by running for office and also convinces Castellan Spandrell he is innocent. It turns out the Master is behind the whole thing because his body is deteriorating. The Doctor and the Master spend considerable time pursuing each other in The Matrix – the Time Lord’s computer system built from the memories of every Time Lord that has ever existed. The Deadly Assassin has wonderful pacing and timing, especially at the beginning as the Doctor is haunted with visions of the President of Gallifrey, and it’s well-worth watching. 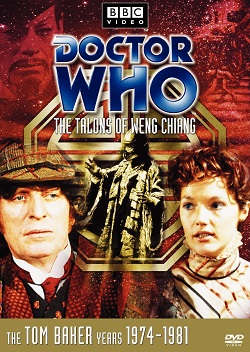 Talons of Weng-Chiang is an interesting episode to list – and first I wasn’t going to include it, but then I realised that if I missed it, I wouldn’t be including any episodes with Leela, and that would be a shame.  The good thing about Talons of Weng-Chiang is that it’s set in Victorian England, and the Doctor gets to play Sherlock Holmes while Leela gets to wear some gorgeous Victorian outfits. The bad thing about the episode is the end has some real issues – and the episode definitely shows it’s age, and when it was made.

The Key to Time was an umbrella storyline with the White Guardian assigning the Doctor and his new companion, Time Lady Romana (Mary Tamm), to find and bring together the six segments of the Key to Time. Each story in the season has Romana and the Doctor looking for a segment. However, within that – each story is completely different. The Key to Time has been released twice, both in expensive box sets. However, a quick look at Amazon shows the stories can also be purchased individually.

The Pirate Planet was written by noted humorous SF writer Douglas Adams. The plot involves a planet not just of pirates, but that is a pirate – the planet is hollow inside and can actually materialize around another slightly smaller planet, crush it, and extract all the valuable minerals and such from the planet. Most of the citizens are unaware of this, except for anyone with latent psychic ability (called Mentiads) who can sense the destroying of the life force of the other planet. The Doctor and Romana must put a stop to the Pirate Planet’s rampage, and recover the Key to Time. 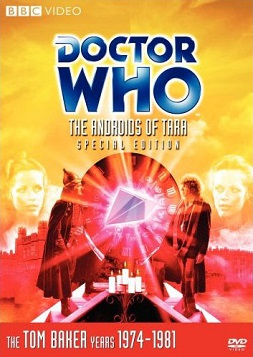 The Doctor and Romana land on the forested, lightly populated planet, Tara, and find the Key to Time right away. However, getting away from the planet proves much harder. Romana is a an exact match for the Princess Strella (and her android), and is captured by Count Grendel. Meanwhile, the rightful heir, Prince Reynart, asks the Doctor to help repair his, that is, the Count’s, android double, so the android can attend the coronation ceremony and draw off Grendel’s assassination attempts. This story is full of captures, escapes, doubles, sword fighting, dashing off on horseback, and it’s just tremendous fun and I love it. If you can get a stand-alone copy I recommend it – there’s very little connection to the Key to Time plot anyway. 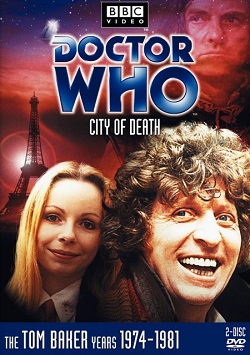 City of Death is also written by Douglas Adams, and for many it’s the classic Tom Baker episode, though it’s also somewhat unusual for the series. City of Death is set in Paris, and involves Count Scarlioni (Julian Glover), who’s really an alien named Scaroth, who’s organizing major crimes such as stealing the Mona Lisa, so he can sell his six copies of the painting – six copies that he had Leonardo DiVinci paint for him – because not only is Scaroth an alien – he was split across time, and his various parts are all trying to merge back together. However, the crash of his spaceship not only split Scaroth apart – its explosion started life on Earth. So, if Scaroth succeeded – the destiny of Earth itself would be forever changed. This story is funny, and witty, and clever – and very enjoyable. 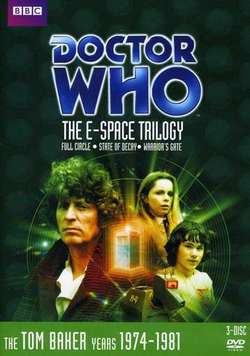 In Full Circle the TARDIS falls through a CVE and lands in E-Space, which has negative co-ordinates. The Doctor, Romana, and K-9, land on a planet that’s approaching Mistfall – a time when mysterious creatures come out of the nearby swamps (which are clear water when it’s not Mistfall), meanwhile, the only people on the planet are castaways from a crashed starship. However, they had also come through the CVE and have no way to get back to their real destination, especially as, over the generations, they have adapted and evolved on their new home planet. Also, the Doctor picks up a new companion, Adric.

In State of Decay, the Doctor and Romana land on a planet of vampires, home to one of the giant space vampires that was capable of destroying an entire planet. The Time Lords had fought a war against the space vampires. The story has some great sets and filming techniques.

In Warrior’s Gate, the TARDIS is hijacked by Biroc, a Time-Sensitive Thrall, who had been used as a slave pilot on time ships. He brings the Doctor, Romana, K-9, and the TARDIS to the gateway. There, he shows him the history of his species, their building of a great empire that collapsed into ruin, and the current status of his people as pilot-slaves. Romana and K-9 stay with the Biroc and another Thrall named Lazlo, Meanwhile, the Doctor and the TARDIS are able to return to normal space.

New Beginnings finishes off Tom Baker’s time as the Doctor, and introduces Peter Davison as the new Doctor in his first story, Castrovalva.

In Keeper of Traken, the Doctor and Adric land on Traken, a planet so peaceful that due to the power of the Source, when evil lands on the planet, it turns into calcified statues in a garden. The current Keeper is at the end of his life, so the Union of Traken is in disarray, and the Keeper asks for the Doctor and Adric to help keep things stable. Consul Kassia marries Consul Tremas, only to discover to her horror that the Keeper has chosen Tremas as his successor. Tremas also has a daughter, Nyssa. The calcified statue, Melkur, manipulates Kassia and she gets her husband, the Doctor, and Adric jailed on false charges (this means Tremas will not become Keeper – something Kassia wants to avoid). Melkur takes control of the Source, but has difficulty controlling it. At this point, it’s revealed who Melkur really is.

In Logopolis, the Doctor decides to fix the TARDIS’s chameleon circuit, using block transfer computation. This involves finding another police box, so he materialises around one on Earth. However, it’s not a police box but another TARDIS, resulting in a complex dimensional trap.  Meanwhile, Tegan, a young air hostess wanders into the TARDIS. The Doctor, after receiving a warning from the mysterious Watcher, heads to Logopolis, a planet dedicated to pure mathematics. The Doctor meets the Monitor, and the Master stops the city from working. However, it’s quickly revealed that Logopolis was behind the CVEs, which function as drain holes to let excess entropy out of the universe. Without this safety valve, the universe begins to destroy itself. Sent to safety with the Watcher, Nyssa and Adric watch as the stars go out, including Nyssa’s home system of Traken. Discovering that the main city of Logopolis is a duplicate of the Pharos Project on Earth, the Doctor and the Master, now in an uneasy truce head there.

And that’s it, my recommendations for the Fourth Doctor, Tom Baker.

2 thoughts on “Classic Doctor Who DVD Recs – The Fourth Doctor”