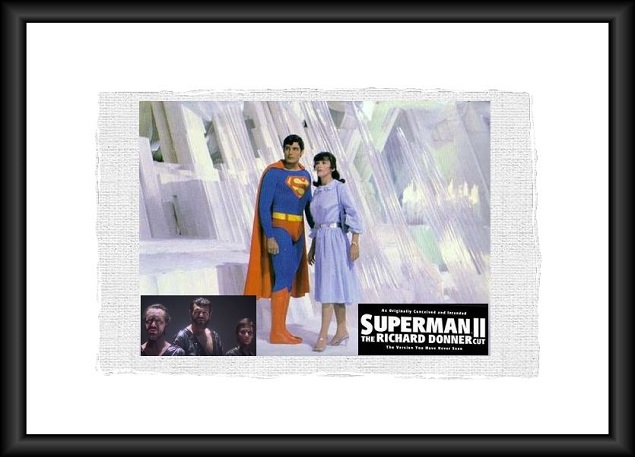 “Clark, once a girl’s seen Superman in action, Niagara Falls kinda’ leaves you cold. You know what I mean?” – Lois Lane

“It is you! I guess I’ve known this for the longest time.” – Lois
“You realize of course, if you’d been wrong, Clark Kent would have been killed.” – Clark/Superman
“With a blank? Gotcha!” – Lois

I never saw Superman II when it came out, and I’m unaware of the details of any controversy surrounding the film, or the director. Apparently, Donner was the original director and was replaced. However, what I watched was Donner’s cut of the film, and that is what I will be reviewing here.

Superman II starts with a repeat of Superman the Movie, with Jor-El carrying out the sentence of Krypton’s high Council to exile three Kryptonian villains to the Phantom Zone. Zod still threatens Jor-El and his heirs. The movie also includes a few clips of the previous film, setting the stage for the sequel. It also shows the missile Superman threw into space from the first film, hitting the phantom zone and at first splitting it apart, then cracking the parts open, releasing the villains.

At the Daily Planet, Perry, Lois, and Jimmy are discussing the story of Superman defeating Lex Luthor. Jimmy says that it’s too bad Clark missed the Big Story. And Lois casually responds, “Clark is never around when Superman is around.” Then she has a lightbulb moment. Perry calls Lois and Clark into his office.  He wants them to go undercover as newlywed’s to cover hotel swindles at Niagara Falls. In Perry’s office, Lois confronts Clark with the idea she thinks he’s Superman. She even goes so far as to throw herself out of Perry’s high rise window. Clark saves her subtly, and without “becoming” Superman.

Meanwhile – Luthor and Otis are working in the prison laundry. Luthor’s girlfriend rescues Luthor, but Otis is left behind.

Also, meanwhile, in Houston, two NASA controllers are talking to the Artemis 2 mission to the moon. The three Kyptonian criminals arrive on the moon. They kill the astronauts and cosmonaut.

Lois and Clark are at Niagara Falls, pretending to be a newlywed couple.

At Niagara Falls, Clark’s glasses get steamed up and she cleans them for him. She’s also taking pictures with a Polaroid camera. A little boy plays on the wrong side of the rail, despite warnings from his mother.

Meanwhile, the three Kryptonian villains fly through the sky, and land in or near a swamp. Zod walks on water.

At Niagara Falls, there’s a beautiful rainbow in the mist from the falls, which no one really notices. However, the little boy loses his grip on the rail and falls. Superman rescues him.

Then Clark returns to Lois. Lois again wonders about this.

In their hotel room, Clark is in a black tux and Lois in a towel applying her make-up. She again talks to him about how it sure was strange that of all the places where a child might be in danger, Superman was here, today. And how she couldn’t find Clark when Superman arrived. Clark tries to talk to her about it. Lois takes out a gun and shoots him. Clark admits he’s Superman. As Superman he takes Lois flying – to his fortress of solitude.

There’s a few cuts showing the Kryptonian villains and what they are doing.

What’s more interesting is that Clark prepares a nice meal for Lois, gives her champagne, and they then sleep together. The next morning, Clark talks to the computer image of his father about being in love with Lois. He decides to expose himself to the radiation of Krypton’s red sun which will take away his super powers permanently and leave him mortal.

Zod and his fellow villains destroy the town of “East Huston, Idaho”. Zod announces he will be ruler. Later there’s a shot of the Washington Monument being destroyed.

As Clark talks to his father, before deciding to take his radiation bath – Lois watches silently from a distance, but understands everything that is going on.

The three Kryptonian villains wreck havoc at the White House. Some advisor kneels before Zod, but Zod realizes immediately he’s not the president. The president agrees to kneel before Zod if everyone is spared. But he mentions that “one man” will never kneel.

Lois and Clark arrive at a diner. While Clark’s in the men’s room, the local bully starts to harass Lois. Clark arrives and instead of beating the guy up or defending Lois’s honor – he’s beaten-up by the guy. Clark is shocked to see his own blood. Lois attacks the bully then they are eventually left alone.

The waitress turns on the news and the president announces that he is “abdicating” all control to Gen. Zod, though in the midst of his speech he calls out to Superman for help.

Clark tells Lois he has to go back. Lois tells him it’s not his fault.

Clark struggles back to the fortress, alone. He sees the destroyed crystal computer.  He calls out to his father and admits his failure. Clark looks extremely sad and sympathetic and it’s some of Christopher Reeve’s best acting in the two films. Then he sees the glowing green crystal. He puts it in one of the few remaining glass tubes in the computer.

There’s an odd crystal mask, then the hologram of Jor-el appears. Jor-el gives his son his final message. There is a way for Clark (Kal-El) to regain his powers. But it will completely destroy the computer and Jor-El’s holographic image. Kal-El is flooded with his father’s essence, when the solid-appearing full-size hologram of Jor-El touches Kal-El he seizes, glows and becomes Superman.

Perry is at the Daily Planet talking to Lois and Jimmy about the three villains. Then they arrive and cause havoc. Non grabs Perry, and hits his head against the ceiling, knocking him out. Ursa breaks Lois’s hand. Zod destroys Jimmy’s camera.

Superman returns and confronts Zod and the others. There’s a major fight scene. When flying Non and Ursa have a vampire-like look. There’s a lot of destruction in “Metropolis” which is obviously New York. The fight continues.

Zod and Ursa throw a bus full of people. Superman is buried between the bus and a truck. Everyone is saying Superman is dead, and a mob even starts to confront the three villains – but they are blown away by super cold breath – that moves people, papers, and even cars.

Superman rises from where he was crushed, but he’s weak – he flies away.

The three villains return to the Daily Planet. Lex tells them he has “Superman’s address”. The three villains take Lex and Lois with them to the Fortress of Solitude. There, Zod threatens to let Ursa kills Lois if Superman doesn’t play ball. He also threatens Lex Luthor. Luthor goes to Superman’s side and Superman tells him they must trick the villains in to the molecular chamber. Luthor returns to the villains’ side and says he “wants Cuba”.

Superman agrees to go into the chamber. But when he comes out he kneels before Zod, then takes his hand and crushes it. Zod and Non are thrown into the pit of the Fortress. Lois hits Ursa in the jaw and knocks her in the pit. Superman had reversed the molecular chamber – so he was safe and the villains made vulnerable.

He, Lois, and Luthor leave the fortress and Superman destroys it with his heat vision. He then flies Lois home to her apartment. She’s crying and saying goodbye to him. She promises to keep his secret. Superman leaves.

Superman then does his time travel thing of flying around the planet and sees that his missile never hit and broke open the Phantom Zone. He then flies forward.

Next day – all seems normal at the Daily Planet, though Lois says she’s “super” and elbows Clark. Clark, also as Clark, finds the bully from the diner. The cook and waitress seem to recognize Clark, and the cook says he just “spent a fortune” to clean up the place. Clark beats-up the bully, says he’s been working out, and offers the cook money for the damages.

The film ends with Superman flying above the Earth in the sun.

I’ve seen this film twice now, and there are things I like and things I don’t about it, although overall I’d say it’s a good movie. When I first saw it, I was confused by the use of time travel, again. And confused by just what happened and what didn’t. Obviously, the Kyptonian villains never reached Earth. But did Lois and Clark never go to Niagara Falls? If they didn’t the little boy who fell into the falls is dead – because Superman wouldn’t know to save him. But if they did – then Clark also admitted who he was to Lois, and brought her to his fortress of solitude. Then it’s likely he became “mortal” – and without three villains from Krypton to fight – villains his family have history with – would he ever decide “the world needs a Superman”? Plus, in the first film, Superman time travels to save Lois’s life – in this film, he time travels, why? So she doesn’t know who he is? To protect the world from Zod and his cronies? What? There didn’t seem to be enough of a reason for it.

However, upon re-watching it – it seems that Superman didn’t go quite so far back. Perry is wearing a different shirt that when he sent Lois and Clark to Niagara Falls. When Clark goes to the diner to beat-up the bully – he’s recognized. Lois even teases Clark that she’s “Super”. So it seems his little forward spin meant some things stayed the same. Lois is also working on a story called, “Superman’s Day Off”.

Speaking of Lois – in the first film, the running joke is that she can’t spell. Which is odd for a prize-winner reporter. In this film, Lois is always hungry. I wanted her to be treated better than that – because Margot Kidder does such a good job with the little she’s given.

Christopher Reeve though really shines in Superman II, the scene where he’s telling the hologram of his father (more like a ghost in these films) that he’s fallen in love with a human woman, and he doesn’t know what to do about it; and the scene where he talks about making a mistake, and losing all contact with his father to regain his power as Superman are powerful – and show Reeve’s acting ability. They were very impressive.

Overall, this reconstruction/director’s cut is a good film and I enjoyed it.

Recommendation:  See It!
Rating: 4 out of 5 Stars
Next Film:  Superman Returns