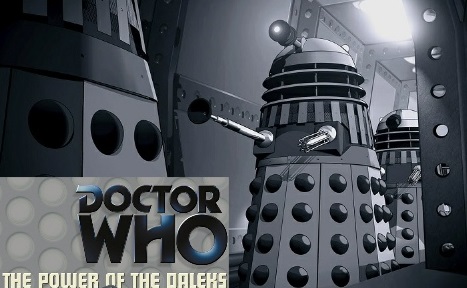 “Life depends on change and renewal.” – The Doctor (Patrick Troughton)

The story opens with the Doctor regenerating in the TARDIS. The previous Doctor’s coat slips off his new and smaller frame, and the previous Doctor’s signet ring falls off his finger. The Doctor checks his reflection in a mirror held by Ben and first sees his old self (Hartnell’s Doctor) and then his new self (Troughton). For the first episode, the Doctor refers to himself in the third person as, “The Doctor”. Polly (Anneke Wills) accepts he is the Doctor, while Ben (Michael Craze) is more doubtful. The TARDIS lands and the three head outside to explore. The Doctor finds the body of an Examiner from Earth who has been murdered and takes his identification, and is then knocked out. Meanwhile, Ben and Polly are checking out some pools of mercury. Even though Ben warns Polly to be careful, she is overcome by fumes. The three are picked up and taken to the colony.

It appears the TARDIS crew are on the planet Vulcan, an Earth colony. We’re told there is some minor problems on the colony, a group of rebels. The Doctor uses his Examiner’s badge to gain every access to the colony and to ask questions. Also, a scientist, Lesterson, has uncovered a spaceship capsule in the mercury swamp that has been there for hundreds of years. He claims he can’t get inside it. The Doctor and others in the colony quickly figure out how to get through the first door using a laser. Later that night, however, the Doctor discovers that Lesterson has already gone inside and discovered three unactivated Daleks. The Doctor precedes to warn everyone in the colony against the Daleks. But of course, no one takes him seriously – and no one appears to know anything about the Daleks at all.

Lesterson starts to experiment with the Daleks – using electric power from the colony to reactivate one. The newly activated Dalek fires it’s weapon on another colony scientist – the scientist collapses and Janley, a scientist in league with the rebels, reports the scientist is only stunned. Later, it is revealed the scientist is dead. The rebels will try to hold the death over Lesterson to bribe him to help their rebellion. But in the meantime, Lesterson and Janley remove the gun from the Dalek. Lesterson is convinced the Daleks will make great servants and help the colony.

The Doctor, after the first episode or two, acts much like himself – using his position as Examiner to ask questions, and trying to stop Lesterson from activating the Daleks. At first it appears there were only three Daleks in the capsule. But one of the Daleks, now castrated (it’s gun removed), convinces Lesterson to provide them with materials. As we find out later, the Daleks also get Valmar, one of the rebels, to lead a power cable into the capsule. In a chilling scene, the Doctor, Ben, and Polly witness a Dalek assembly line with Dalek creatures being taken and put into Dalek machines. The sucker arm and gun are attached and the top put on, one by one the Daleks become active as they roll off the assembly line. The Doctor becomes more determined to stop the Daleks and save the colony.

In the second half (last three episodes), the Governor of the colony is off checking on the perimeter stations, so the rebels take their chance. The assistant governor takes over, Janley re-arms three Daleks, Lesterson finally realises that the Daleks are dangerous and that there are many of them. He briefly agrees to help the Doctor, then gives up and offers to serve the Daleks – he’s killed for his trouble. The now armed Daleks kill everyone – rebels, guards, and colonists alike. They even kill the assistant governor who was using the rebellion to take over (he also personally kills the governor). The Daleks use an electrical cable loop to generate static electricity, which they use as a power source. This is how the Doctor defeats them, overloading the static power loop and blowing up the Daleks. This harms the colony’s power system. Although many are now dead, some colonists survive. Some of the survivors aren’t too happy about the damage to the colony’s power plant and systems. However, they will rebuild and improve the colony. The Doctor, Ben, and Polly make their way through the mercury swamp and leave in the TARDIS.

“The Power of the Daleks” is a good story. Surprisingly, it’s about exactly what the title says: how to power the Daleks. First, Lesterson uses the colony’s power to re-animate the three Daleks. Then the Daleks plot to get power (and supplies) to their ship to power their assembly-line and to bring to life the Dalek creatures in the vat. Finally, as the Daleks use static electricity for power, they plot out how to lay cable to generate the static electricity they need. The assembly line scene is very chilling and perfectly done in the animation.

Overall, the animation for “The Power of the Daleks” is very good. There is one scene where Polly and others are leaving a scene to unseen stage left and instead of turning and walking off stage, they face front and sort of hop and disappear to the side – like puppets, but that was one odd scene. The facial expressions and detail is very well realized and I just enjoyed it a lot. I would love to see more of the Doctor Who missing stories re-created with animation. Unlike “Power of the Daleks”, many of the stories have some of the half-hour original episodes left on film/video so the entire story would not need to be animated. That is, a story might have two out of four parts remaining as actual original black and white film/video so only two parts would need to be animated. Furthermore, several of the William Hartnell and Patrick Troughton stories have already been released in this hybrid fashion – as many of the original film/video episodes as possible and the missing episode filled in with animation and the original audio. This seems like the only way to bring these original early stories back so Doctor Who fans can see them.

Again, “The Power of the Daleks” is an excellent Doctor Who story. I really enjoyed it, animation and all. I’d love to see more missing stories released this way. Highly recommended.