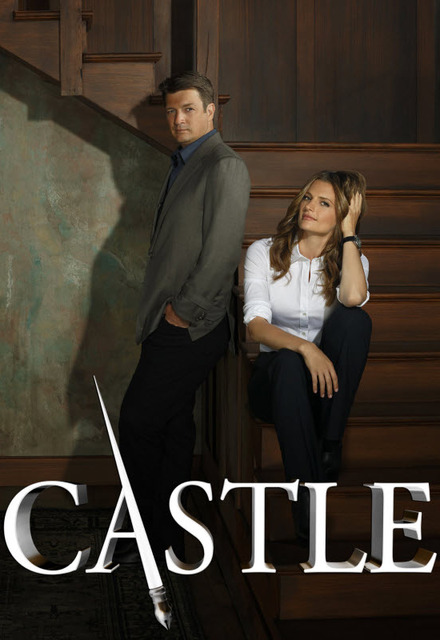 The final season of Castle is very uneven. When the best part of the season is the section of the season where the show returns to “normalcy” there’s an issue, and season 8 is even more uneven than season7. The opening two-parter shows the same case, for the same couple of days, from first Richard Castle’s point-of-view and then from Kate Beckett’s point-of-view, skipping the scenes where the two of them run into each other for the second go-around. In part one, Castle and Beckett start their morning together, then Kate is supposed to start her first day as the captain of the 12th precinct. Castle shows up at Ryan and Esposito’s multiple shooter homicides and finds Kate’s bracelet that he had given her that morning – in a pool of blood. It becomes obvious Kate was kidnapped or something is going on. From Kate’s point of view we find out Kate’s early morning call wasn’t a telemarketer like she told Castle (lie number one) but a warning, and as Castle discovers quickly Kate didn’t have a meeting at 1PP about being a new captain (lie number two). The first lie frankly is forgivable, – the call was a warning, having to do with Kate’s time in the Attorney General’s office, and by her oath and various “security things,” she literally couldn’t tell Rick about the warning or threat. The second lie is a little less forgivable – Kate didn’t need to lie to Castle about where she was going – and he quickly found out about the lie.

Kate is given a warning – a serious one. She meets a new analyst for the AG’s office, who tells her every person in her former team is now dead. In a conspiracy-theory laced plot that spans the two episodes, Kate discovers someone called “Lockset” is behind the deaths of her former team, Senator Bracken in prison, Bracken’s own conspiracy, meaning also her mother’s murder, oh – and eventually, Castle’s disappearance for two months during the previous season. The conspiracy isn’t the focus of every episode of the season, but it is an underlying element that rears its head fairly often. There are episodes almost entirely focused on Lockset, and episodes where it’s barely mentioned but the plot is advanced a bit. And there are episodes where it’s not really present at all.

The worse part of the Lockset conspiracy is that Kate, is convinced that if Rick knows anything about it, he will die trying to protect her, so she decides to walk out. She asks Rick for a trial separation and the two act like a couple on the verge of divorce. Castle decides he has to win her back. About halfway through the season, the two are forced back together by circumstances, the lying stops, and the series is a lot like it normally is: fun, light, romantic, crime-fighting. It’s Rick who discovers Lockset is tied into his missing two months, that somehow he learned information about it in Los Angeles, his actions or lack of action caused the death of Kate’s team, and Rick was so terrified by what he learned that he asked his “CIA handler” to erase his memory (last season’s umbrella theme). Rick also underwent having his own memory erased to protect Kate. To give Rick credit, and Kate too – they decide to stop lying to protect each other. Good move.

This season also introduces Hayley, a British detective and former MI6 operative who knows Rick’s step-mother and whom gets involved in Rick’s detective business. Hayley gets along very well with Alexis who is now working at her father’s detective agency. I liked Hayley, and I liked that she was portrayed as Rick’s friend and business partner – but never as a possible romantic interest, even when Rick and Kate were split up.

Kate gets her own partner, the analyst, who assists her in all things Lockset.

The second to last episode of the season is Castle’s annual Halloween episode, with no ties whatsoever to Lockset or even any of the other on-going themes of the season.

The finale, as promised, is all about wrapping-up Lockset. It’s a bit of a confusing mess. Castle is captured and interrogated under a truth serum. To make things worse, his interrogator asks simply yes or no questions as to who Castle and/or Kate have told about Lockset: his mother (yes, earlier in the episode), his daughter (yes, earlier in the episode), Ryan and Esposito (yes, earlier in the season), Kate obviously. Notably, he does not ask about Hayley or the young man helping Kate. Castle is crying that he had betrayed everyone. The police arrive, but they all get pinned down by an army of troops in the room. Castle breaks the wall, and gets to the basement, to rescue Kate from Lockset – someone she thought she would trust. Castle succeeds and there’s a celebration at the precinct. But when Kate and Rick are celebrating at home, someone they thought had died shows up. He shoots Rick. Kate shoots the man, but not before he gets shots off – at Kate. The camera hovers over the bodies of Rick and Kate, holding hands. Then we hear Rick’s voiceover about “finding his muse” that we haven’t heard for several seasons. And we see an unconvincing flash forward to seven years later, of Rick, and Kate with several children.

It’s a very strange and spooky ending. The “seven years later” additional bit could very well have been all in Castle’s mind, especially as I can’t see Kate have six or more children. One or two, yes. But six? And we know Rick’s a great father, and he’s always seemed to want more kids, though he doesn’t seem to pressure Kate about it. Which begs the question: if the last couple of minutes never happened, or only happened in his head, how much of the episode, the season, or even the last eight seasons was Castle’s “I’m dying hallucination”? And last season had an episode where Castle gets an artifact which transports him to a place where he and Kate never met – and Kate was a captain. He “returns” to this “universe” but it makes one wonder. There have also been several very psychological thriller type episodes in the last two seasons: the one with the twins who were tortured by their psychologist parents (which is very unrealistic), Castle’s whole losing time thing, and believing he had good reasons for it when he starts to remember last season. Even the Halloween episode has a psychological bent to it. So the last episode of season 8 is very, very unsettling.

The best parts of the season were the stories that didn’t mention Lockset at all – or barely did. This season also features two Kate-less episodes, the only time in the entire series she doesn’t appear. And three of Fillion’s former colleagues from Firefly show up. Sigh. I can see why the show was canceled, rumors of fighting co-leads aside. But I actually did enjoy the season more than I thought I would, so there’s that. And even with the final episode being a bit of a mess, I can still say, it’s worth watching, especially if you’ve been watching the entire series.

Read my review of Castle Season 7.

Read my review of Castle Season 6.