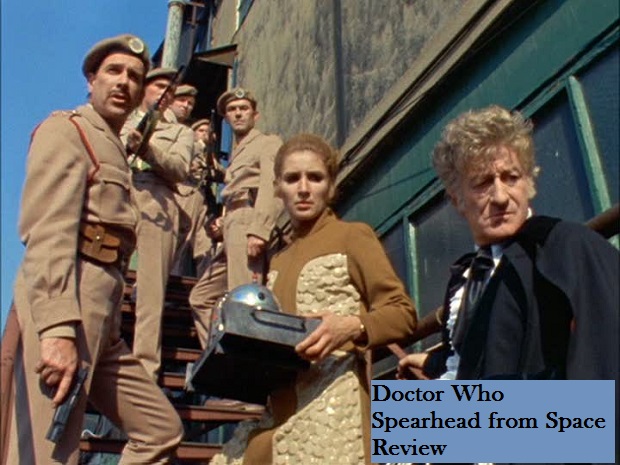 “What are you a doctor of, by the way?” – Dr. Liz Shaw
“Practically everything, my dear.” – The Doctor

Spearhead from Space is known for its firsts and is almost what would now be termed a soft reboot of the series. It’s the first story filmed in color, and unusually for the series – the entire episode was shot on film and on location. At the end of the previous story, The War Games, the actor portraying the Doctor, Patrick Troughton left, as did his companions Zoë (Wendy Padbury) and Jamie (Frazer Hines), so as well as introducing a new Doctor, Spearhead from Space introduces a new companion, Dr. Elizabeth Shaw, a scientist from Cambridge, and the Brigadier returns, still in charge of UNIT. Doctor Who will now be focused on Earth-bound invasion stories, set in the “near future” (something later forgot by the production team who seemed to assume the stories were contemporary to when they were made).

This story has the Doctor’s TARDIS arriving in a wood, the Doctor stumbling out, and collapsing. He’s brought to a nearby cottage hospital and is unconscious for much of episode one, and erratic for much for episode two. It isn’t until he takes a shower in the hospital and borrows some clothes that the Doctor seems to wake up – eventually working with Liz and the Brigadier to discover just what the mysterious landfall of meteorites and strange goings-on at Auton Plastics factory mean. The story develops somewhat slowly but fits together well, as bit by bit, UNIT, the Doctor, Liz, and other characters in the story, learn what is going on. UNIT’s radar station reports on the meteorites and the Brigadier tells Dr. Shaw a larger group landed earlier. Liz scoffs at the Brigadier using the word, “landed”.

Meanwhile, a poacher in the woods finds one of the “thunderballs” and buries it to hide it. UNIT is looking for the meteorites and finds the Doctor’s TARDIS. The Doctor is unconscious at the local cottage hospital. In episode 2, a salesman returns to his factory only to discover it mysteriously changed, his boss unreceptive to his hard work opening a new market in the US, and a letter of dismissal at his home. He later sneaks back into the factory and discovers an Auton who fires at him. Terrified out of his wits he runs out to the woods and into UNIT’s hands. One of the Brigadier’s men takes his statement. He later convinces the Brigadier something is wrong at the factory. Meanwhile, the poacher digs up his “thunderball” and transfers it to a metal box in his shed.

The alien in this story is the Nestene Consciousness, which has no form to speak of, only a hive mind stored in the hollow plastic-like balls that landed during the meteor shower. The Consciousness can animate plastic and co-opts the manager of a plastics factory. This story features store dummies breaking out of window displays, and plastic duplicates of General Scobie and other civil servants and military leaders. The salesman is instrumental in giving information to the Brigadier and UNIT that something is wrong at the factory – but he’s also killed by an Auton dummy. Eventually, his boss, the factory manager, who was under Channing’s control is also killed by the Autons. And when the Doctor and Liz construct a device to disrupt the signals animating the Auton mannequins and break up the Nestene Consciousness – Channing is revealed to be another Auton dummy. During the final attack, the device works fine on the basic Autons but doesn’t work on the Consciousness itself. The Doctor is attacked by tentacles coming out of a tank, and it’s Liz who, on her own must adjust the device until it works, which saves the Doctor and defeats the alien menace, so to speak.

They return to UNIT, and the Doctor bargains with the Brigadier, getting a job as scientific advisor to UNIT, with access to equipment and tools, plus essentials like clothing (since he borrowed his current outfit from the hospital) and a car (since he must return the borrowed red roadster he used in the episode). The Doctor gives the name of “Dr. John Smith” for his paperwork that will make him official on Earth.

Spearhead from Space starts off a new era for Doctor Who. It introduces Dr. Liz Shaw and changes the direction of the show. The cost savings of staying on Earth with contemporary settings, like offices, and 1970s London, were put into car chases, effects, large-scale practical attacks, and a grander scale for the stories. Spearhead from Space is almost like a pilot in introducing these ideas: there’s a chase scene with the Doctor in a wheelchair, UNIT makes an assault on the Auton Factory, the setting is meant to be slightly futuristic but since people still use corded phones (and pay phones at that) and in one scene all the reporters are male – there’s an old-fashioned quality to it too. But it definitely starts to establish the new rules and new patterns for the next three years. Pertwee would play the part for five years, but only regain the time and space traveling abilities of his TARDIS after the tenth-anniversary special, The Three Doctors. The story itself is a bit slow in spots, but the four-episode length helps it from being extremely slow. I liked that Liz actually saved the Doctor herself without any assistance, but I didn’t like that she gets no credit for this, not even a thank you from the Doctor. Still, this is a great place to start with when watching the Third Doctor, or even for starting to watch Classic Doctor Who.