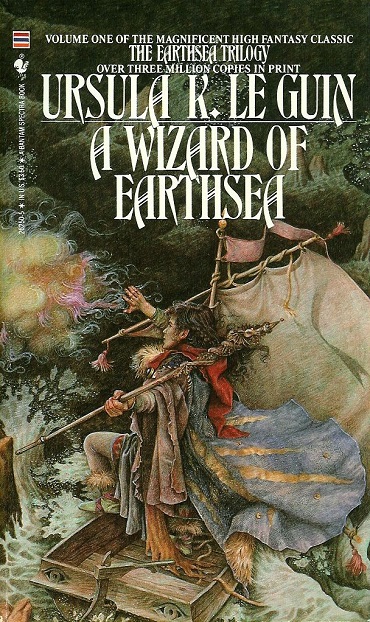 I finished this over Thanksgiving Weekend, but with one thing or another, this is the first time I’ve had a chance to sit down and review it. The first paragraph promises a story of Sparrowhawk famous Archmage and dragonlord before he was famous, and this volume (the first of three) is pretty much exactly what it says on the tin. Ged lives on a small island located in the Archipelago of Earthsea, there isn’t much to do on his island but herd goats or fish in the sea. One day, Ged overhears a woman use a command to control her herd of goats – he tries it and all the goats move to him when he repeats the command the goats move in closer. An old woman witnesses this and prevents Ged from being crushed. She informs him he has magic and he could be a talented wizard. She takes Ged under her wing and begins training him. Ged does well. A few years later, as Ged realizes he’s close to learning everything he can from his local witch, a sorcerer comes to visit his village. the sorcerer offers to train Ged, now called Sparrowhawk, further if he follows him. Ged agrees and abandons his home island.

This new wizard reminds me of Yoda. He says little but expects Ged to learn by listening and observing. Sparrowhawk begins to learn a bit about controlling the natural world, such as influencing and even calling to himself animals and birds (he’s especially good with birds of prey, thus his name) and influencing the weather (which he’s less successful at). He meets a young girl, but the wizard training him warns Sparrowhawk off her because she’s “dark” (meaning “dark side” or evil). The girl gets Sparrowhawk to go through the wizard’s library and open and read one of his forbidden tombs. Sparrowhawk does this and is attacked by a dark shadow. The wizard arrives to beat it off – but gives Sparrowhawk an ultimatum – go to the wizard university to study, or stay and keep his nose out of forbidden books. Despite warnings of dire consequences, Sparrowhawk chooses to go to the wizard university.

The first test at the wizard university is to successfully find the door and enter. It takes Sparrowhawk a few tries but he succeeds. He’s introduced around by an assigned an older student as a mentor. Sparrowhawk immediately dislikes the student who’s meant to show him around and help him adjust to life at the school. It was extremely unclear to me why Sparrowhawk thought Jasper was out to get him. Jasper seems perfectly kind and polite. Jasper is no bully and neither is he the type of spoiled “top boy” who can be irritating because he is so perfect. But Sparrowhawk chooses to dislike the boy who is meant to help him out. Sparrowhawk also makes a friend, Vetch. So he remains at the school, doing well in his studies.

But one day, Jasper does challenge Sparrowhawk (or vice versa) and in the ensuing fight, Sparrowhawk remembers the dark spell he learned from his second teacher, the quiet wizard. He tries to cast the spell, and it backfires spectacularly – Sparrowhawk and Jasper are injured and knocked out, and the Archmage of the school who attempted to contain the evil is killed. After he recovers from his physical hurts – Sparrowhawk is greatly humbled and finds learning magic less instinctive and very difficult. But he continues.

Eventually, Sparrowhawk does graduate, and he’s sent to a small fishing island to the far East of Earthsea. He becomes close friends with one of the fishermen and his family and learns that a dragon with nine children lives on a nearby island and is considered a threat. When Sparrowhawk fails to save the fisherman’s terminally-ill son, he has to prove himself, and he goes after the dragons. Sparrowhawk does well, killing or maiming many of the dragons, and driving off the biggest momma dragon. But the dragon warns him of the shadow hanging over him.

Sparrowhawk tries to return to the island that is home to the wizard university but is defeated by the spell that protects the island from evil. Sparrowhawk realizes that the shadow that attacked when he used the evil spell against Jasper never really left him, and he goes on a very long Quest to destroy this shadow. Vetch joins him on the quest. He eventually succeeds and Sparrowhawk’s discoveries during his quest will lead to the next book.

I had mixed feelings about this book. I liked the setting of the semi-independent islands in Earthsea (all of which are direly poor thanks to the lack of central authority, and land). And I liked the Buddhist/Japanese background for the mythology and themes of the story. It reminded me a lot of Star Wars and the Force (all the Wizards who know what they are doing keep telling Shadowhawk about “balance” and how important it is). But on the negative side, the author seems to feel that one Should Not Use “Big Words” in a children’s book (this is a young adult novel, something I didn’t realize when I started it) – a tendency I find really irritating. The language in the book, despite being simplistic, also has a strange structure – almost as if English isn’t the author’s first language (and it is – I looked up the author). There’s a lot of oddly strung-together descriptions that are both long and just strange, much to the book’s detriment. Overall, I give it three out of 5 stars, and I’m not sure when I’ll read the next volume.