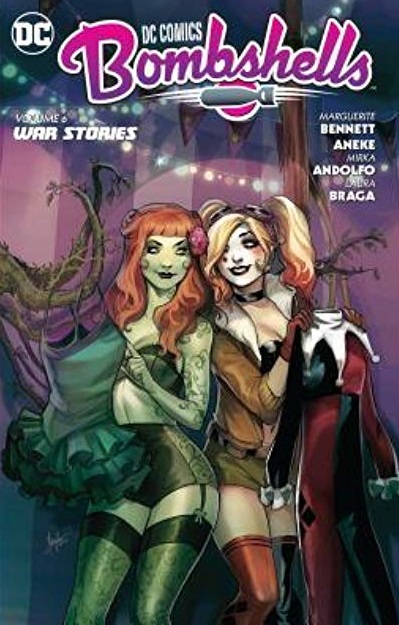 **Spoiler Alert** The final volume in the Bombshells series, volume 6 War Stories brings the series to a satisfactory conclusion, although there will be a sequel series called, Bombshells United. This volume largely takes place during the Seige of Leningrad, though there are different areas of the battle. There are also a few flashbacks that largely work.

However, the first story in Volume 6 is largely unconnected. The Suicide Squad (Barbara Gourdan), Ravager, Enchantress, Killer Croc, and Lt. Frankie Charles) sneak aboard a German U-boat commanded by Edward Nygma. They’ve come to rescue Luc Fuchs, an engineer and close friend of Barbara’s. They discover the sub is a ship of tribute to the King Beneath the Black. The Suicide Squad rescues the engineer, foils Nygma’s plot, and escapes.

A flashback introduces Faora Hu-Ul, a Kryptonian, who is the real power behind Joker’s Daughter, the Baroness, Killer Frost, and Hugo Strange. She was hidden in an Egyptian tomb explored by Lt. Charles. Charles hears the warning about Faora, and it is instrumental in her joining the Suicide Squad under Amanda Waller.

But the introduction of Faora Hu-Ul, and the adventure with Nygma are mere prologue – the rest of the book is the final conflict between good and evil during the Seige of Leningrad. This includes magical conflicts. Zatanna and John Constantine are looking for Raven. Raven is looking for her father, Trigon. Supergirl hopes to see her adoptive parents again. The theme of parents, children, and family is strong.

When Raven finds Trigon and confronts him, she is angry that he never took responsibility for the harm he did. Raven is also upset he joined the Nazis. But when Trigon is killed – Raven loses control of her magic. With help from Zatanna and John, she learns to control it. Constantine meets Abigel Kholland who is leading Russia’s magical creatures that escaped the Nazis, including Swamp Thing.

Reaper finds Hugo Strange and kills him because he murdered her family but she is then killed in turn by Killer Frost. Killer Frost is then captured by Lois Lane.

Faora tells Kara (Supergirl) about Krypton and tries to recruit her in her plan to create a Kryptonian Empire on Earth. Supergirl refuses because she’s shocked that Faora destroyed Krypton. Kara feels it is better to work within the system to improve and fix it, rather than to destroy everything. As Raven rejected Trigon, Kara rejects Foara. She even uses Kryptonite to capture Faora, who had become Doomsday, inside Swamp Thing. Kara is also reunited with her foster parents and her sister, Stargirl’s biological father. The reunion doesn’t last, because they sacrifice themselves in the spell to bind Faora.

I really enjoyed the Bombshells series. Volume 6 War Stories rushes to a conclusion but it is still a good read. I felt including a Kryptonian who turns into Doomsday using magic and Raven’s blood was unnecessary. But, on the other hand, Joker’s Daughter and the Baroness had already been defeated. Killer Frost is defeated in this volume, but not before doing a lot of damage. There are also some great panels in this volume (I loved seeing John transform himself into a hare again.) And the art is stunning. And I loved seeing both Supergirl and Raven confront their evil parental figures, rather than just agreeing with them out of hand. However, this volume could have used more character development (there’s some – but it’s mostly a series of battles, including magical ones.) I recommend the series and this volume in particular.