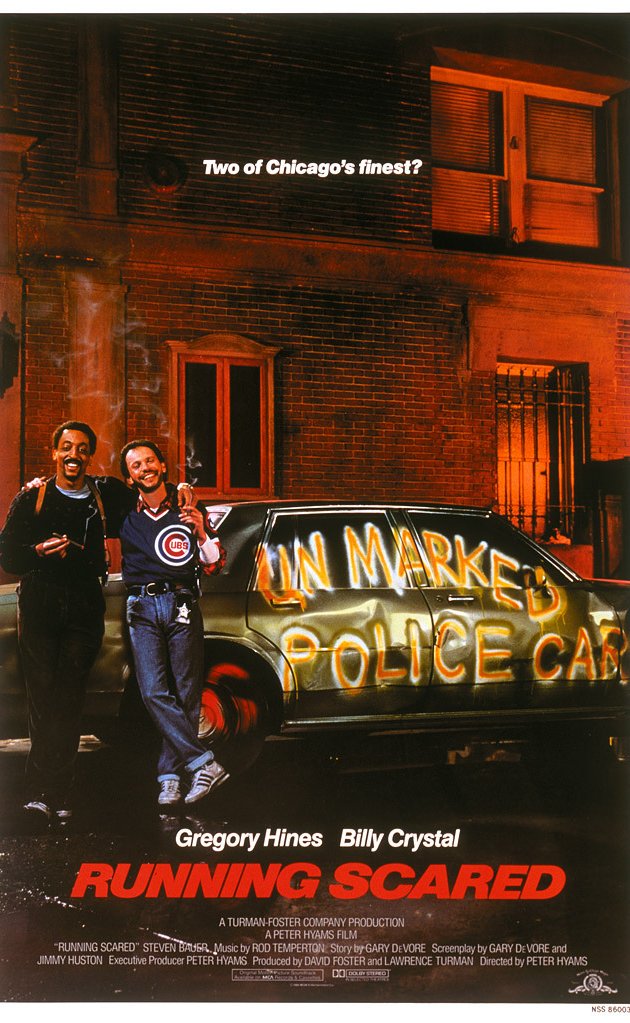 “Careful gets you killed in this business.”  — Captain Logan

Running Scared is a fast, funny, buddy cop drama with plenty of action, shootouts, and a great car chase on an elevated train track. The film is mostly set in Chicago (and filmed on location in Chicago and Stokie, Illinois) with a brief interlude in Key West, Florida (also shot on location). Detective Danny Costanzo (Crystal) and Detective Ray Haughes (Hines) are two wise-cracking, wild and crazy Chicago cops. They bust a drug pusher with $50,000 and figure they can use him to get to Julio Gonzales (Smits) a drug kingpin with plans of becoming the first Hispanic godfather of Chicago. While taking the pusher, Snake, in; the two cops: stop at the aftermath of a jumper, stop by the funeral of Danny’s Aunt Rose, and nearly get mugged until they point out they are the cops.

Once Snake has been taken in to the station house, they convince him to wear a wire to set-up Gonzales. However, the planned bust turns into a disaster, when not only is Snake killed, but Danny and Ray walk into a DEA investigation and mess it up. Their captain, Logan, is ticked and gives the two detectives a month of forced vacation. Did I mention it’s the middle of winter? Danny takes part of his inheritance from his Aunt Rose and he and Ray head to Key West for some R & R. Danny even considers buying a bar in Key West and retiring there, giving up being a cop.

However, before the two cops can retire they have to return to Chicago. Once in Chicago again, they decide to finish the Gonzales case. Again, the two become wild, though Danny also starts becoming careful because he’s actually given his notice to retire in thirty days. Both the captain and his partner point out that, “Careful gets you killed.”

Meanwhile, Danny’s ex-wife, Anna, has told him she’s getting re-married to a dentist. Danny, clearly still in love with her, isn’t happy about the idea.

Detectives Costanzo and Hughes continue to work the drug case, now saddled with training their replacements, the two narcotics officers from the messed-up DEA bust. There is a fantastic car chase with Ray and Danny in their new undercover police car, a yellow taxi cab, which goes from the airport, down I-190, and on to the L tracks. The L chase feels like a roller coaster ride and is a lot of fun. The filming of the chase is also extremely well done. However, Gonzales decides to get rid of the two officers; his men find their car while they are on stakeout and flip the car into a garbage truck and crushes it. The detectives, however, are fine.

Then Gonzales takes Danny’s ex-wife hostage, demanding his stolen cocaine (which Hughes and Costanzo found at the airport) as ransom. The climax of the film is in a building identified as the Illinois State Building (but it looks like a really nice shopping center). Anna is in one glass elevator, and Danny has to take the other. Meanwhile, Ray sneaks in the back way, discovers all the county sheriffs tied up and has to use the window washing equipment to get into the building. There’s another huge shoot-out and Gonzales is killed. In the end, both Danny and Ray decide to stay in Chicago and continue to be police detectives.

Overall, this is a fun film. In definitely has roots in Beverly Hills Cop, The French Connection, and other buddy cop films of the time, but it’s still fun. Crystal and Hines have a great relationship; and the film is full of their wisecracks and jokes. Neither appear to be realistic Chicago cops; but the film is enjoyable to watch. The car chase on the L is also a definite must see.

Recommendation:  See it!
Rating: 3.5 Stars out of 5
Next film:  Sabrina 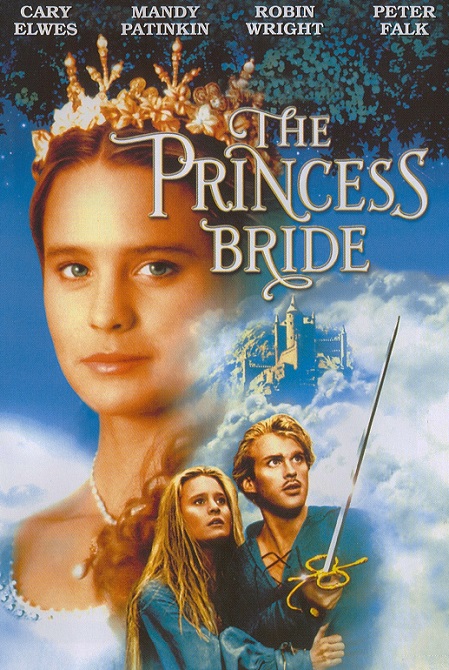 “You fell victim to one of the classic blunders.  The most famous is never get involved in a land war in Asia.  But slightly less well known is this – never go in against a Sicilian when death is on the line.”  — Vizzini

“We’ll never survive [in the Fire Swamp].”  —  Buttercup, the Princess Bride
“Nonsense, you’re only saying that because no one ever has.” — Westley

“You know how much I love watching you work – but I’ve got my country’s five hundredth anniversary to plan, my wedding to arrange, my wife to murder and Gilder to frame for it.  I’m swamped.” — Prince Humperdinck

The Princess Bride is one of my favorite films of all time.  It’s a film I actually owned a copy of on VHS, then replaced with a DVD.  I absolutely adore this film — it’s smart, fun, intelligent and chock full of fun and quotable lines.  The film actually has two storylines — the frame story of a grandfather (Peter Falk) reading the story of The Princess Bride to his grandson (Fred Savage) who is home sick.  The growing relationship between grandson and grandfather adds a sweetness to the film, as does the young boy’s growing interest in the story.  The main storyline, though, is the story of Westley and Buttercup, two young lovers separated by fate who simply must end-up together.  However, what prevents the story from sinking into typical romantic comedy is the intelligent, witty dialogue and the simply gorgeous cinematography.  The film pulls itself together in such a way that it just works incredibly well.  It’s also shot in a very storybook style, which ranges from castles with interiors that obviously look like sets, to some simply wonderful sunsets, and some great scenery when Buttercup and Westley first meet again. (The wide shots of the castles are no doubt real ones in Ireland and England where parts of the film were shot).

This film also has some wonderful sword fights.  The fight between Westley and Inigo Montoya is wonderful! I really enjoy it every time I watch the film.  But there’s also some wonderful fight scenes between Montoya and the evil Count Rugen.

Overall, the film is just enjoyable.  Simply enjoyable.  It’s funny, it’s sweet, it’s romantic.  The good guys are good because they treat other people nicely and well, and the bad guys – Vizzini, Count Rugen, and Prince Humperdinck are bad guys in part because they treat other people terribly.  Humperdinck’s motivation is also to start a war between Florin (his country and home to Buttercup) and neighboring Guilder.  And a bit of wordplay with the names of  the country as well – Florin and Guilder are two coins in a former Netherlands currency.  Florin is also the name of an old two-shilling coin in the UK that’s no longer in use.

If by some chance you haven’t seen this movie, it’s an absolutely must-see.

Recommendation:  See it!  Also good for all ages without being overly sweet.
Rating:  5 of 5 Stars
Next Film:  The Producers