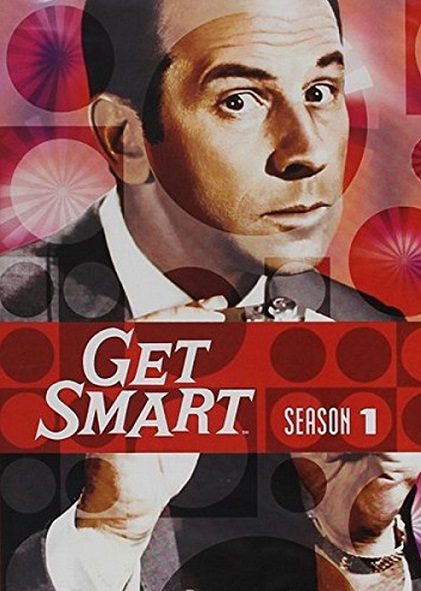 In the 1960s the Spy Genre suddenly became very popular. US television had The Man from U.N.C.L.E., I Spy, Mission: Impossible, and The Wild Wild West to name a few. British television had Secret Agent Man (aka Danger Man), The Avengers, and The Prisoner. Movies had James Bond and plenty of James Bond imitators. Get Smart was a comedy created by Mel Brooks and Buck Henry that both joined and parodied the Spy Genre. But like all of the best comedies, for Max, 99, and the Chief – they don’t know they are in a comedy, and the humor comes from the characters and the situations. Get Smart has physical comedy (in the first season poor Max gets knocked into swimming pools, fully clothed in a suit more than once), and witty, clever dialogue. There are also a lot of catchphrases, which for a while became part of the national lexicon.

Maxwell Smart (Don Adams), is Secret Agent 86 of Control, a super-secret organization that fights the international organization of evil – Kaos. 99 is his female partner. And the Chief sends them on their missions. For the first half of season 1, Max is often joined by Fang, agent K-13, a fluffy brown dog. Max is actually quite intelligent and extremely earnest as an agent. He also loves his job. When the Chief tells him that he will be on a dangerous mission, Max’s response is: “And Loving It”, which beyond becoming a catchphrase, is his attitude – he loves his job. But Max, also, doesn’t always think things through, which provides a lot of the humor for the show. Max, with help from 99, always manages to complete his missions – successfully.

99 (Barbara Feldon) is the more competent one in the partnership between her and Max. She is a full-blown agent, not an “assistant” or junior agent, which makes her a role model. Like Max, she often goes undercover, or simply works with Max on his missions. They meet for the first time in the pilot (the only episode shot in black and white), and 99 immediately develops a crush on Max. Their relationship will develop throughout the run of the show. But in season 1, Max is completely oblivious to how 99 cares about him romantically. Although there is this romantic thread between 99 and Maxwell Smart, it never overshadows 99’s abilities as a competent secret service agent – well, competent for Control that is.

The Chief is the head of Control, and he usually sends Max and 99 on their missions. Occasionally, Max or even 99 will discover something on his or her own that starts the case – such as an informer offering information or asking for help. Missions vary from well-constructed short mysteries to spy/adventure stories in season 1. Later on, direct parodies of other spy shows or general movies join the mix. Still, Season 1 starts out with everything in place – we are introduced to Max, 99 and the Chief in the pilot and from then on, it’s Get Smart. This is not a “slow burn” series that takes time to develop – everything is there from the start.

Other semi-regular characters that appear in season 1 are Agent 44, who is usually stuck in a letterbox, porthole, base violin case, etc.; Larabee, a regular Control agent, who in Season 1 doesn’t even get any lines; Hymie – the Control robot is introduced in one episode; Fang Agent K-13 as I mentioned above, also early in the season the Chief has a male secretary/assistant, and we see various scientists who develop and demonstrate special equipment in the Control labs.

Get Smart is a gadget-filled show, and every episode has special equipment, including a wide variety of special hidden phones and radios. Max’s shoe phone is well-known, but there are several others. Oddly enough, in this era of smartphones, that Max and 99 always have some sort of communication device at the ready doesn’t even seem odd. Both also have a number of special guns – including a gun that’s also a phone used in the two-part episode, “Ship of Spies”.

The other notable thing about Get Smart, at least to me when I watched it, was the clothes. Oh, my, god, the clothes are gorgeous – both for Max and 99. Although early episodes have Max in black or charcoal grey suits, later ones have him in burgundy, blue, light grey, worsted wool (which must have been fun in California in a studio) – his clothes are gorgeous. Also, at least in season 1, Max wears very thin ties (probably a little more than an inch wide), which I always think are more attractive. The ties aren’t wild, but they have color and pattern and always perfectly compliment whatever suit Max is wearing. 99 gets beautiful clothes too – dresses, pantsuits, a black jumpsuit that’s identical to Max’s jumpsuit except for her number for undercover breaking into places. The hemlines on 99’s dresses aren’t too short, and she usually has sleeves – these aren’t the sleeveless sheath dresses that pop-up in other television and movies from, or especially, set in the 1960s. I haven’t had this much clothing envy watching television since Miss Fisher’s Murder Mysteries.

Notable episodes in season 1 include: “Double Agent” – one of my favorite episodes, ever, of the series – Max goes “bad” to infiltrate a ring of Kaos spies – the finale is one of the best things ever and I won’t spoil it; Our Man in Toyland – Kaos is running a ring of spies in a department store, the final battle between Max and 99 and the Kaos agents has them successfully using various toys against Kaos agents armed with guns (also the head Kaos agent is Herr Bunny); Aboard the Orient Express, The Dead Spy Scrawls, The Amazing Harry Hoo, the two-part Ship of Spies, and Shipment to Beirut (which actually takes the same plot used in a favorite The Man from U.N.C.L.E. episode – smuggling information in high fashion clothing – and treats it more seriously than UNCLE did).

The only negative about Get Smart is that it is a series from the 1960s, so there is some institutional racism in the program. It’s never overt, but at times it is there. This isn’t an every episode thing (other than the incredible lack of people of color), and although there’s one or two cringe-worthy moments – they are moments, it is not a regular thing. I’ve seen worse in other shows from the era. And the show is to be commended for making 99 the competent one and 86 the if not quite incompetent one – the one who gets the laughs because his earnest nature just causes all sorts of problems.

I have the complete series in a Collector’s set which is quite nice – see picture below.

I quite enjoyed re-watching Get Smart. I recommend this show! And if you’ve never seen it, you might want to give it a try. Get Smart is fun, witty, intelligent and enjoyable.

North by Northwest is a very fun, enjoyable, romantic (in both senses) and exciting Hitchcock film. The film’s entire plot rests on a case of mistaken identity. Grant is Roger Thornhill, an Madison Ave (NY) advertising executive, who is meeting some friends and business associates in a hotel bar, when he realizes he needs to send a telegram. He raises his hand to call over the hotel telegram boy just as the telegram boy is calling out for George Kaplan. This is observed by two foreign agents, and thus the snowball starts to roll downhill. The agents assume Thornhill is Kaplan, and kidnap him, taking him to a house in the country. There, he is questioned, and forced to drink a bottle of bourbon. They then pour Thornhill into a car, hoping he will have a nasty accident. Thornhill, however, is somewhat familiar with drunk driving, and he’s able to make his escape, though he is spotted by the police and arrested for drunk driving.

The next morning, Thornhill and his lawyer, played by Edward Platt, attempt to explain what happened. Of course, there is no evidence at the country estate that anything happened, and the hostess who answers the door puts on a performance, claiming she was worried after he’d gotten tipsy at a dinner party. Thornhill pays his $2.00 fine.

Thornhill then returns to New York, searches Kaplan’s hotel room and goes to the United Nations building to meet Townsend, the man who kidnapped him the previous night, he thinks. But the man he meets isn’t the Townsend (James Mason) who kidnapped him. Before he can get any answers, or straighten out the mess, Townsend is killed by a thrown knife. Thornhill, like an idiot, picks up the knife — and his picture is snapped as he does so. With no other choice, he goes on the lam, sneaking aboard a train bound for Chicago, because that was where Kaplan was scheduled to go.

Meanwhile, we meet “The Professor” (Leo G. Carroll) and his merry band of spies. They discuss the issue of Thornhill, and their fake agent “Kaplan”, as well as their real agent who will be in danger, if they step in and clear Thornhill. “The Professor” declares they must do nothing.

On the Chicago-bound train, Thornhill meets Eve Kendall, who hides him. Grant and Kendall immediately have a connection, trading flirty dialogue. In Chicago, Kendall arranges for Grant to meet Kaplan; but we also see her talking to Leonard (Martin Landau), Townsend’s chief henchman, on the phone. Kendall’s directions lead Thornhill to a dry, dusty, deserted road in the middle of a cornfield. He’s attacked by a crop duster.

Thornhill survives that, confronts Kendall, and Grant’s performance is excellent. He’s very icy and cold when he confronts her — subtlely seething with anger that she betrayed him. He then follows her to an auction. Townsend (Mason), his henchmen, and “The Professor” as well as Kendall are all there. When it looks like he’s going to be caught by Townend’s goons, Grant makes a scene at the auction and gets himself arrested. But he’s released and taken to the airport by Carroll. “The Professor” explains more of the plot, before taking him, by plane, to South Dakota.

There, by the Mt. Rushmore monument, the film winds down to it’s conclusion.

Hitchcock uses a lot of very high angle shots in North by Northwest, almost like a kid with a new toy, but it does work. Grant is fantastic as the confused innocent. Eva Marie Saint plays Kendall with icy maturity, even in her more romantic scenes with Grant. The supporting cast is great. Leo G. Carroll, of The Man from U.N.C.L.E. plays a very Mr. Waverly-like character as the un-named head of some un-named security organization. In fact, the entire film almost seems like a pilot for The Man from U.N.C.L.E. at times, but with a much bigger budget. Martin Landau is menacing, and quiet, as Leonard, James Mason’s henchman. And James Mason himself has a cold, sophisticated, frightening evilness about him. Edward Platt, of TV’s Get Smart, as a brief but fun role as Thornhill’s overworked lawyer. Overall, the film is great fun. The bi-wing crop duster chasing Grant in the cornfield, and the climatic chase across the face of Mt. Rushmore are famous movie scenes, that are also quite enjoyable to see intact and in context.

Recommendation:  See it!
Rating:  4 of 5 Stars
Next Film:  Notorious