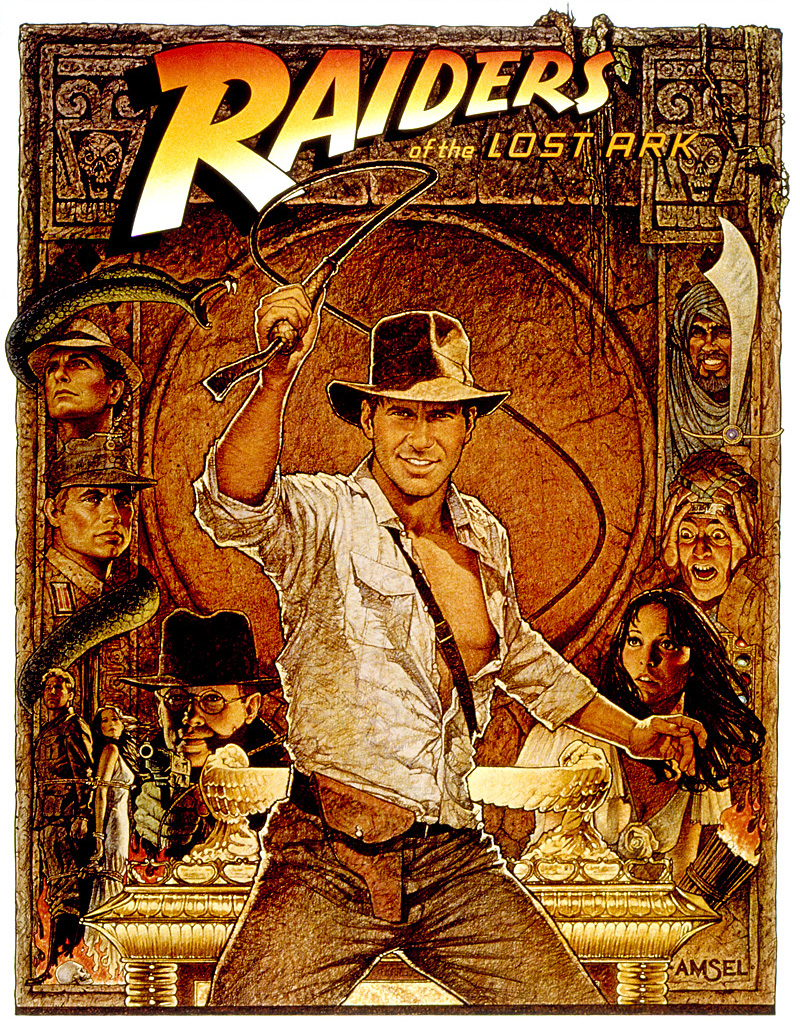 One of my favorite movies from my childhood, right along side Star Wars (the original), Indiana Jones is a tour de force of  non-stop action and adventures. From the stirring music to the unforgettable characters, and stunning direction, it’s the movie that made me fascinated with movies. It should be noted that the title of the first Indiana Jones film is Raiders of  the Lost Ark, the “Indiana Jones and the…” was added to the DVD release — fortunately it’s only on the DVD case, the film itself  still has the original title in tact.

Indiana Jones, also like Star Wars, has it’s origin in the old movie serials of the 1930s — full of action and adventure, and continued from week to week with a cliffhanger at the end of each episode. And whereas Star Wars is partially based on the SF serials such as Flash Gordon and Buck Rogers, Indiana Jones is based on the adventure serials in spirit but brings an original twist to the idea with it’s characters. But it does follow the tradition of keeping the audience’s interest by having brief episodic stories within the main story. That is, the settings change frequently in the movie, from the jungles of South America, to an American University, to Nepal, to Egypt, as does the action. This definitely adds to the action and adventure of the film, or as one of the promos has it — “If Adventure has a name, it must be Jones.”

The film begins in the middle of an adventure, with Indiana Jones searching a jungle in South America for a golden idol. It fact, the first shot we see of Indiana Jones is as he steps into the light after using his bullwhip to disarm a native guide who was going to shoot him. Ford, as Jones, in leather jacket and fedora, with bull whip and revolver, steps into the light — and he is the character, this is all we need to know. In fact, for the entire first scene, we don’t even know this explorer’s name. Indiana manages to get the Idol, and escape the temple, only to have the idol stolen from him by a rival French treasure hunter named Rene Belloq.

Next we see mild-mannered Jones teaching archaeology at his university. He’s tracked down by government agents and sent on a race to get the Ark of  the Covenant before the Nazis do. This is the core of the film, the race to find and take the Ark. The film includes the famous “snake” scene, as well as the ultimate torching of the Nazis by the Ark’s power.

But one of the most chilling images in the film is the Ark being boxed up by US Army Intelligence and locked away in a mysterious warehouse, filled with other wooden crates. Makes me wonder every time I re-watch Raiders of  the Lost Ark, just what else is hidden away in that warehouse.

But the film is pure fun — action, adventure, romance (in the old-fashioned sense of the word), fiery women, real men, everything a young girl could want in a film. And the magic doesn’t wear off no matter how many times one watches it. Spielburg and Lucas created a timeless classic that just never gets old or looks dated.

Recommendation:  See it!  This is especially a great film for young teens and pre-teens to adults.
Rating:  5 of 5 Stars
Next Film:  Indiana Jones and the Temple of Doom