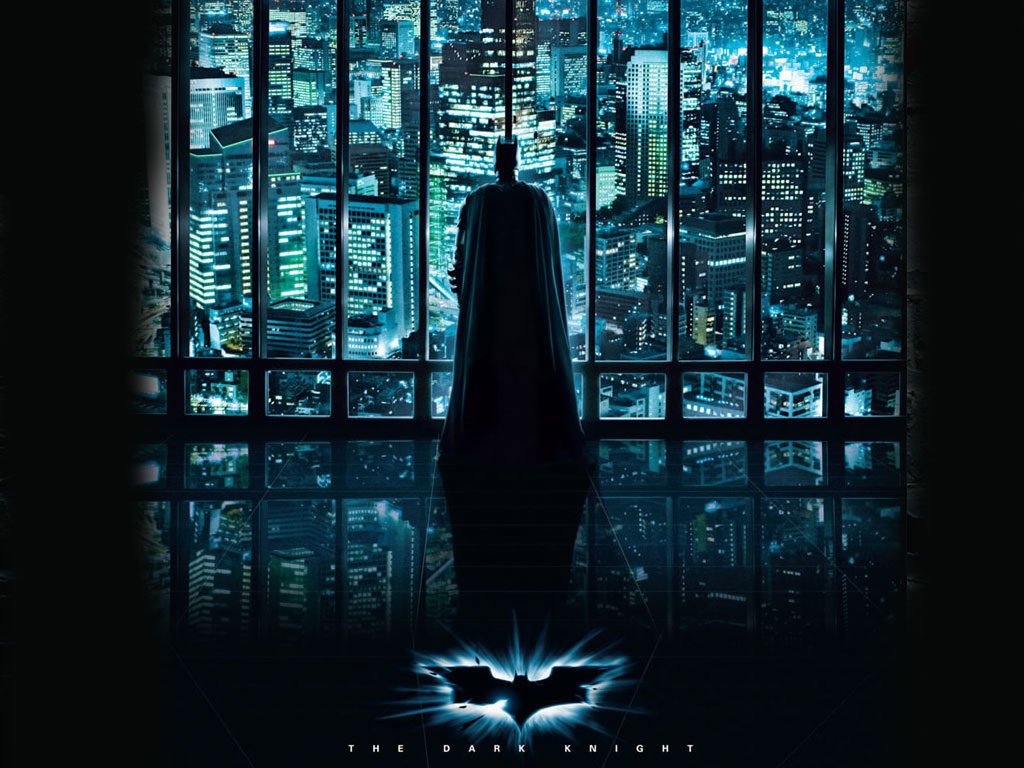 I simply adore The Dark Knight, the action-packed sequel to Batman Begins. Actually, I saw it first, in the theater, and then saw Batman Begins second, and on DVD when I did see it for the first time. But, re-watching it, it still strikes me as an incredibly well-crafted film. Yes, it starts big and fast-paced and gets bigger and bigger and bigger — but like the Legend of the Batman itself, it gets darker and darker as it goes along. It’s also a very enjoyable film to re-watch because of the little touches and attention to detail that come from a fine director.

The Dark Knight in some ways is The Joker’s film, played with maniacal insanity by Heath Ledger. The film starts with his violent robbery of a mob bank, which includes the systematic killing of each of his accomplices, and ends with The Joker’s death. But, Ledger’s performance, as compelling as it is, isn’t scene stealing — and the rest of the cast also performs extremely well. Bale’s performance as Bruce Wayne is even better, and now Bruce seems to have grown up a bit. He is, however, still capable of playing the “dumb playboy” as when he crashes his Italian sports car to protect a witness transfer and then claims to Gordon it was an accident. (Gordon: That was a brave thing you just did. Wayne: What? Trying to beat the light? Gordon: Protecting that transport van. Wayne: Why, who was in it? Gordon: You don’t watch the news much, do you, Mr. Wayne?) Christian Bale does a particularly believable “dumb blonde” act (or “fluffy bunny” act as a famous blonde actress once described it, wish I could remember who). Anyway, he’s also equally marvelous in the various scenes where he’s supporting Harvey Dent’s political career.

As Batman, they made one change in Dark Knight from Batman Begins that I didn’t like, and that was messing with Batman’s voice. It sounds like “Bruce” is speaking through some kind of voice changing box, which in turn, sounds electronic and artificial. In Begins, Bale gave Batman a deeper, more resonant, gravely voice that also sounded scary. Though I could see Bruce Wayne, billionaire at large, trying an electronic voice altering box to protect his identity – overall it was one effect I don’t think worked.

Michael Caine is wonderful as Alfred. You can see how much he loves and cares for Bruce, and how much he understands him. After the opening scene, when Bruce gets mauled by a Rottweiler, among other things, and is trying to stitch himself up, Alfred arrives and admonishes Bruce for making a mess of things. He calmly stitches the wound. Bruce then turns away as he’s pulling on a white business shirt, and Alfred winces at the bruises on Bruce’s back. But, equally, he will not say anything, because he knows it’s what Bruce must do.

Morgan Freeman is wonderful as Lucius Fox, particularly when someone at Wayne Enterprises thinks he’s discovered that Wayne Enterprises is supplying Batman his toys, and he intends to get $10 million a year for the rest of his life not to reveal the secret. Fox shuts the guy down… then asks Bruce about the re-funding of the R&D department. Fox also shuts down Batman when he discovers Batman’s plan to use cell phone signals to create a sonar map of Gotham City – but Batman knows Fox well, giving him the key to destroying the mapping software without telling him what it is.

Lucius Fox and Sir Alfred Pennyworth — the two men who keep Bruce sane, and allow Bruce Wayne the time to be Batman — running interference, covering for him, and producing cover stories and alibis.

Gary Oldman, again, is a wonderful young Jim Gordon, who gets appointed to Commissioner in this film. Eckhart is an inspired choice for Harvey Dent. Physically, he’s quite different from the Dent of the books, but his performance as Dent is perfect — and even better when he becomes Two-Face — he, also, is truly nuts — and the scene in the hospital between Joker and Two-Face is brilliantly written and brilliantly played by both Ledger and Eckhart.

The first time I saw the film, I saw Harvey Dent, and being a fan of the books, knew who he would turn out to be, but I thought, especially with Joker in the picture, maybe not in this film. Then, when Dent proposed to Rachel my first thought was, “oh no, she is so dead”. Because in the Batman universe, pretty much no one can be happy, and everyone just endures. Re-watching the film, of course, I know where they were going with Dent — and it becomes even more tragic. Watching Gotham’s Golden Boy DA being destroyed has almost a mythic quality. (And yes, he “dies” at the end, and no, I don’t believe that one for a moment).

Finally, the city of Gotham itself is brilliantly played by Chicago. From the first scene, looking at skyscrapers on the edge of the Chicago river, to Commissioner Loeb’s funeral on State St — this movie is very obviously filmed in Chicago. And Chicago, with all it’s Art Deco architecture and the modern extremely flat glass skyscrapers, is a perfect Gotham. The area near the River is used a lot. Lower Wacker Drive is actually used several times, especially in the car chases (yes, that’s not a super long parking lot, it’s Lower Wacker Drive). There is actually even a line spoken by a cop in the film “turn on to Lower 5th”) as they turn onto Lower Wacker Drive. The Chicago River bridges are used again, even more effectively and more often than in Batman Begins. But the best “oh, that is so Chicago” scene is the funeral for Commissioner Loeb, right on State St. in front of Marshall Field’s (or what used to be Field’s — it may be a Macy’s now), those narrow, tall windows that Gordon wants checked for snipers? That’s a style so identified with Chicago that it’s called the “Chicago window”. Also, there are some nice shots of Art Deco decoration on the buildings during some of the pans, as the camera moves around looking for the snipers. And, the Pipes and Drums band playing for the funeral? That is the real Chicago P.D. pipes and drums band playing – they even get a credit. Also, I imagine several of the “extras” in uniform were real Chicago cops. Ah, it’s “my kind of town”.

The filming again is brilliant. Although not as intimate a movie as Batman Begins, which centers on Bruce becoming Batman, The Dark Knight, again based in Graphic Novel canon, including Frank Miller’s The Dark Knight Returns and Year One, and Loeb’s The Long Halloween trilogy, opens up the film’s universe and brings in two of Batman’s best-known enemies, The Joker (Batman’s Moriarty) and Two-Face. Yet, there’s still very nice filming tricks like a full circular sweeping shot, and brilliant use of light and dark (such as the scene in the interrogation room, where, in the end, Gordon leaves Batman with the Joker). I also liked the sound design, with the high-pitched squeal that sounds half like a scream and half like nails on a chalkboard being used whenever the Joker was about to do something particularly nasty.

Overall, a film not to be missed. I happen to own only the single-disc edition, and I’d considering upgrading to a Blu-Ray player just to get this movie (and Lord of the Rings) in an expanded edition with more special features.

Recommendation: See it! Show it to your older children. Own it!
Rating: 5 of 5 Stars