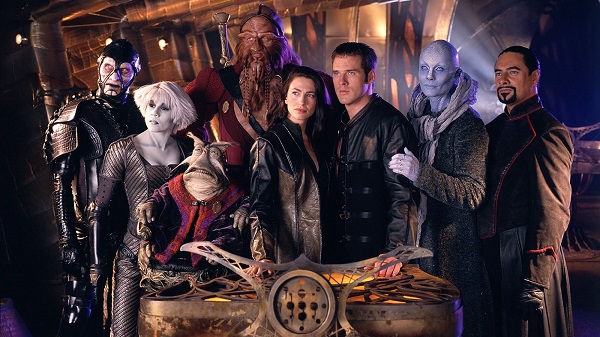 I enjoyed Season 3 of Farscape more than Season 2. Captain Bylar Crais, Stark, and Scorpius have all been promoted to regulars. Zhann is quickly killed off (to heal Aeryn, who “died” at the end of last Season). Most of this season is split into two distinct plot threads, as we now have ten (depending on how you count them) regular characters.  In the zombie episode, “Eat Me”, Chiana, D’Argo, and John are cloned, twinned, or doubled by a mad scientist to provide zombie food. The extra Chiana and D’Argo are killed, but when they finally escape the Leviathan of the  Living Dead — it’s with two Johns. One John stays aboard Moya with D’Argo, Chiana, and a new character called Jool.

The other John joins Aeryn, Crais, and Rygel aboard Talon. ”Eat Me” was a really gross and disgusting episode that I could barely watch – but then, I don’t like zombie movies. However, it also serves only a single purpose – producing a duplicate of John. The episode ends with both Johns playing rock-paper-scissors and always throwing the same thing.

I preferred the Talon episodes for two reasons – they were the more dramatic episodes, and I’m a sucker for drama and melodrama. But I also really liked Capt. Crais. You saw a lot of growth in his character, from a man in Season 1 who only wanted revenge on John (for an accident no less) to a man willing to sacrifice himself by the end of the season. Crais was a complicated character and you really did not know which way he’d jump, what he really wanted, or what he’d do. You could never completely trust Crais, but honestly, on Farscape – you could never completely trust anyone. I loved the character development for Bylar Crais. Like Aeryn, once outside the Peacekeeper sphere of influence (and likely their brainwashing and propaganda) Crais began to think for himself and chose his own path.

The Moya episodes tended to be silly. Yes, they were the comic relief following the dramatic episodes in the Talon storyline, but I felt they went overboard. ”Scratch-and-Sniff” felt like something written after the writer had had a few too many Pina Coladas. Or, like someone’s explanation of Spring Break. Essentially, John has to explain to Pilot, who’s now acting like an exasperated parent, just how he got himself and D’Argo banned from a pleasure planet. I just thought it didn’t quite measure up to Farscape standards. ”Revenging Angel” or “John challenges Scorpius in Looney Tunes land”, was probably novel at the time it aired (tho’ the “Jessica Rabbit” comment indicates the creative team knew about Who Framed Roger Rabbit) but it didn’t work for me. I just thought some of those episodes, especially “Scratch ‘N’ Sniff” and “Revenging Angel” went overboard in the humor and had characters, especially D’Argo acting out of character.

Also – I couldn’t stand Jool. Or screaming girl, which was about the only thing she could do. Every time she got in the least bit of danger, I didn’t feel any sympathy for her at all – I wanted her to get killed off. Which is not something you want for a major character.

I really liked “Infinite Possiblities” parts 1 and 2, because finally, John (or John 2 — the one aboard Talon) gets everything he wants: Aeryn’s in love with him and even willing to go with him to Earth if he can find a wormhole, he’s destroyed the Scorpius clone in his head, and he’s figured out the wormhole equations. So, what happens to John 2?  He dies of course. The death scene is marvelous, and I loved that Aeryn was with him. I also thought Rygel’s funeral for John was beautiful, but it’s the nature of the show that once John gets everything… he dies. And Aeryn is in such shock after the death of “her John” she can’t accept the other Crichton on Moya.

After John 2’s death, all the characters re-connect. Stark, who disappears again after “Infinite Possibilities”, leaves a message for John 1 (Moya John) from John 2 (Talon John), dying Talon John warns Moya John about wormhole weapons. But the last thing he does is throw rock-paper-scissors. Moya John does the same thing. The throws are different. This suggests that although the two started from the same place, they are now different.

The combined crew quickly form a new plan, to assault and destroy Scorpius’s command carrier, so that Wormhole Technology cannot be used as a weapon. You know this won’t go well, right? They do manage to destroy the ship. They do so in such a way that the majority of the 50,000 men, women, and children aboard can escape, abandon ship and survive. Crais and a now suddenly-mad Talon (that was introduced too quickly) sacrifice themselves to destroy the command carrier. All of Scorpius’s wormhole data is destroyed. It was unclear to me if Scorpius died or not. It’s suggested he did – but he also seems to always return so I wouldn’t bet on it.

After the successful assault, everyone is seriously ready to split up. D’Argo wants to go back to the Luxans to warn them not to ally themselves with the Peacekeepers. Chiana wants to find her brother and the Nibari resistance. Rygel wants to try to take back his throne as Dominar. Aeryn, unable to face a double of her lover, just wants to leave. And even John, thinking he might now be able to figure out wormholes, wants to return to Earth. They decide they will help Moya take Talon‘s remains to the Leviathan burial space, then split up.

The last episode of Season 3, “Dog with Two Bones”, felt rushed and confused. Suddenly, there’s a mysterious witch or shaman on Moya, who’s messing with John’s head. This John’s head is pretty busy, because Scorpius’s neural clone is still there. Moya’s attacked by another Leviathan, without a pilot, so that takes up much of the episode. Aeryn in her new prowler and John and D’Argo in his Luxan ship attack and easily destroy the mad Leviathan, which disappears. Somehow, I expect that plotline will be revisited (or at least I hope so). However, in the end, John, almost out of fuel, in his Farscape module, is still trying to figure out what to do. A wormhole appears and sucks in Moya. Aeryn’s already gone in her prowler. And John is left, sitting alone, in his low on fuel capsule, drifting by himself in space.

Technically, for Season 3, it seemed they decided to film two episodes simultaneously – the Talon episode and the Moya episode. This gave everyone time off except Ben Browder who played two characters – and Lani Tupu, who played both the voice of Pilot and Capt. Crais, tho’ the dubbing of Pilot’s voice may have been done in separate post-filming blocks. The “making of” featurette on the Farscape Season 1 set, suggested that during filming Rygel was voiced by the puppeteer, and Jonathan Hardy dubbed in the voice later. I’d guess the same thing was true for Lani Tupu and Pilot. It must have been exhausting for Browder – but then, he’d been the point of view character for this show for three years.

Overall, I really liked Season 3. It was especially successful on DVD. When I watch a TV series on DVD it’s like reading a book, and the individual episodes are chapters. Well, with a structure like this, with one episode following one set of characters, and the next episode following a different set of characters, it was like reading a book that flips between different settings and characters – I wanted to know what was happening to everyone so I read, or in this case, watched it faster, normally four or five episodes a day. That’s a lot of Farscape. But I liked it. Oh, and the creatures were back! Yeah, for the interesting, different, and unique creatures!