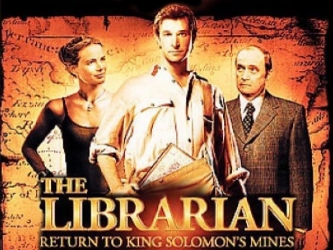 “Flynn, I trust you, we send you on missions alone.  It’s just you have a lot to learn.”  – Judson

“Sometimes, you have to give up what you want for the greater good.  You see that’s the difference between a good librarian and a great one.” – Judson

“Be safe.  Don’t get killed.  Save your receipts.” – Charlene

“You’d be surprised what you can learn at the Library.”  – Flynn

This film starts with Flynn Carson on a quest to retrieve the Crystal Skull of Atlantis.  He manages to grab it from some pot hunters, but before he can sneak away, he’s distracted by finding a Sioux arrow head, which would be unusual to find in Utah.  In attempting to retrieve it also, he catches the attention of the pot hunters.  They give chase to Flynn and his Native American companion.  The two run away, and eventually reach a high gorge.  Flynn and his partner jump their horses into the gorge and land in a rushing river.  Flynn’s companion is shocked he knew there would be a deep river at the base of the gorge.  Flynn gives him an explanation about average rainfall – only to have his companion tell him he had the month wrong.  Flynn’s blasé response is, “huh, we should have been flattened like pancakes.”

Back at The Library, Flynn’s expecting congratulations for finding the Crystal Skull.  And although Judson is happy about it, he still reins Flynn in for taking too many risks.

That night Flynn heads to his mother’s, only to walk in on his own surprise party.  His mother tries to set him up on a blind date with his third cousin.  Flynn is not amused.  The evening turns out to not be a total loss though when he runs into his “Uncle” Jerry, his father’s best friend, who works in “Import/Export”. Jerry gives Flynn his father’s amulet.  Flynn’s birthday is somewhat bittersweet, Flynn’s father died when he was thirty-two and Flynn was eight.  Now Flynn is thirty-two.  When Flynn gets home to his apartment he finds it’s been trashed.  He calls Judson, but is knocked out before he can tell him much of anything.

Judson sends him on a quest for the two-part Key of Solomon a map Legend to decode the Map of Solomon to King Solomon’s Mines, but warns Flynn that sometimes a Librarian must give up what he most wants – for the greater good.

In Casablanca, Flynn meets Emily Davenport (Anwar) an archeologist with twenty-five degrees who’s possibly smarter than he is.  Together they set out on the quest.

Flynn is attacked, but when he sees the Mason Symbol amulet Flynn wears that was his father’s, the man backs off, shows his own amulet, and explains he’s part of a Secret Society of Masons protecting King Solomon’s Secret and that the “secret must be passed”.  Flynn gets the first part of the Legend, and the guy tells Flynn the second part is in Kenya.

In Africa, Flynn and Emily find a man buried in the sand up to his neck.  They rescue him and Jomo becomes their guide.  Flynn tells Emily that his father was mugged coming home from work, and the “coward” shot him.  According to Flynn, they never caught the guy.  So, Flynn’s father was shot dead when Flynn was 8-years old, by a mugger.  Does that sound familiar?

The scenery in Africa is beautiful.  Because the second film really emphases Flynn’s background, especially his loss of his father, the story has more heart, and less comedy than the previous film.  Flynn is also experienced and professional, and no longer bumbling in his role as the Librarian.

Flynn and Emily examine the map and the two pieces of the legend.  Flynn realizes the map is sheet music. He plays the music on one piece of the map legend, and the map becomes a 3-D map showing them how to get to the mines.  Flynn and Emily leave the train, and Uncle Jerry, who goes his own way. Once again, Flynn and Emily are off on an adventure, in search of  the Mines.

As they follow the map, Flynn realizes that the pictures he drew as a child, based on his father’s bedtime stories, are actually places they will find while searching for King Solomon’s Mines.  Flynn realizes with some astonishment, that his father was preparing him for this quest his entire life.

Eventually, they reach the ante-chamber to the Mines, Flynn and Emily have to cross a stone bridge over a river of  lava.  They do, and Flynn discovers his father’s amulet is literally a key to the treasure chamber. Inside, Flynn opens the web-covered book, which sits on a plinth in a shaft of light.  Emily distracts Flynn before the weird stuff the book is doing to Flynn completes.

The concluding scenes are quite good, and I don’t want to spoil them.

This chapter in The Librarian series isn’t as funny as the first – it’s definitely more adventure than comedy. However, the story, by emphasizing Flynn’s relationship with his father, and that history, has more heart. The conclusion is wrapped around the relationship between Flynn, his father, Jerry, and Flynn’s mother, so it works well.  Flynn is no longer the bumbling professional student.  He is now an experienced Librarian and adventurer.  Emily is impressive, an archaeologist with twenty-five degrees, she’s smarter than Flynn but knows nothing about The Library.  And, The Library is only seen at the beginning and very end of the film.  Once the quest is over, Flynn does go back to the Library, having learned about his own personal history, as well as having first-hand experience as to exactly what Judson meant by, “Sometimes, you have to give up what you want for the greater good,” and has progressed in his career as the Librarian.  Emily goes off on another dig, continuing her own personal quest to discover more about the Queen of Sheba.

The Librarian Return to King Solomon’s Mines is still a good, light adventure film.  Although it doesn’t have the strong comedy elements of  The Librarian Quest for the Spear, it makes up for it by having more heart, and delving deeper into the character of Flynn Carson, Librarian.  There are references to the Indiana Jones films, especially Last Crusade, but also references to Batman and Butch Cassidy and the Sundance Kid. It’s quite the enjoyable film. 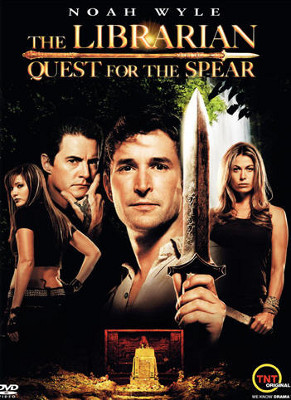 “You are about to begin a wondrous adventure from which you will never be the same.  Welcome to The Library.”  — Judson (Bob Newhart)

“You are now part of a very special community.  The secret of the library has been kept for thousands of years.”  — Judson

“I believe in you, Flynn, I think there’s a possibility you could be a great librarian.” — Judson

Flynn Carson is a bookish professional student, with twenty-two degrees, six alone in Egyptology (one wonders how he paid for them all?  But thinking of the Real World is not something you should do while watching this film).  His current professor gets fed up with him, and throws him out into the “Real World” to get a job midway through the semester, signing off on his degree.  Flynn is devestated – he has no idea how to get a job and doesn’t really want one.  He goes home, where his mother has set him up on a blind date with a girl about his own age – who’s a social worker.  Flynn gets even more depressed.

Flynn’s in his room, when he suddenly finds an envelope.  He opens it and words appear, inviting him to apply for the position of The Librarian.  Flynn goes to the interview.  At The Library, there’s a huge line of applicants.  Flynn hears the protests and even cries of the previous applicants.  He’s about to duck out of line when a voice orders him in.  Flynn passes the pre-test question easily, and more importantly passes the Real Question.  He meets Judson, who takes him into The Library, underneath the library.  The Library is a wondrous place, indeed, home to all of  human knowledge, and a number of  magical, mystical, and real human artifacts, such as Pandora’s Box, the Mona Lisa, the Ark of the Covenant and Excalibur.

Flynn is beginning to settle in to his new job, when there’s a break-in.  Judson is knocked out, but not seriously harmed.  It seems one part of the Spear of Destiny has been stolen.  The Spear was broken in to three pieces for safe keeping.  Flynn is sent on a quest to find the other two pieces of the Spear and stop the evil organization known as the Serpent Brotherhood from assembling the Spear and causing havoc.  Flynn is soon joined on his quest by Nicole, a bodyguard for the Library.

The film resembles classic adventure films like the Indiana Jones films and Romancing the Stone.  But it is not a parody.  It takes that style of film and introduces it’s own characters and it’s own plotline, but most of all it has fun. There is a lot of humor in this movie – it’s it’s not simply the obligatory quip and the occasional really good one-liner.  The film is simply fun to watch and the cast is terrific.  Noah Wyle is great as the wide-eyed, bumbling, professional student who has, among other things, memorized the Earth, but can’t quite master flirting with a girl, or have much in the way of practical knowledge of the Real World.  Nicole is very like Michael Douglas’s character in Romancing the Stone – we even see her hacking away at jungle growth with a machete, while the branches hit Flynn.  But the story opens up too – not only do the characters go to a jungle in South America, but also to mysterious Shargri-La in the Himalayas.  Nicole has a reason for her somewhat icy personality, but she’s dedicated to her job of protecting The Librarian.  And Bob Newhart and Jane Curtin, have small roles in terms of screen time – but they are vital to the plot.  And both make the film that much more fun.

This is simply an enjoyable film to watch.  It’s bright, funny, and very light weight.  And it’s a good start to the series’ universe. Yes, this is a TNT Original film, which spawned two sequels, and a  television series which starts in December 2014.

Next Film:  The Librarian Return to King Soloman’s Mines