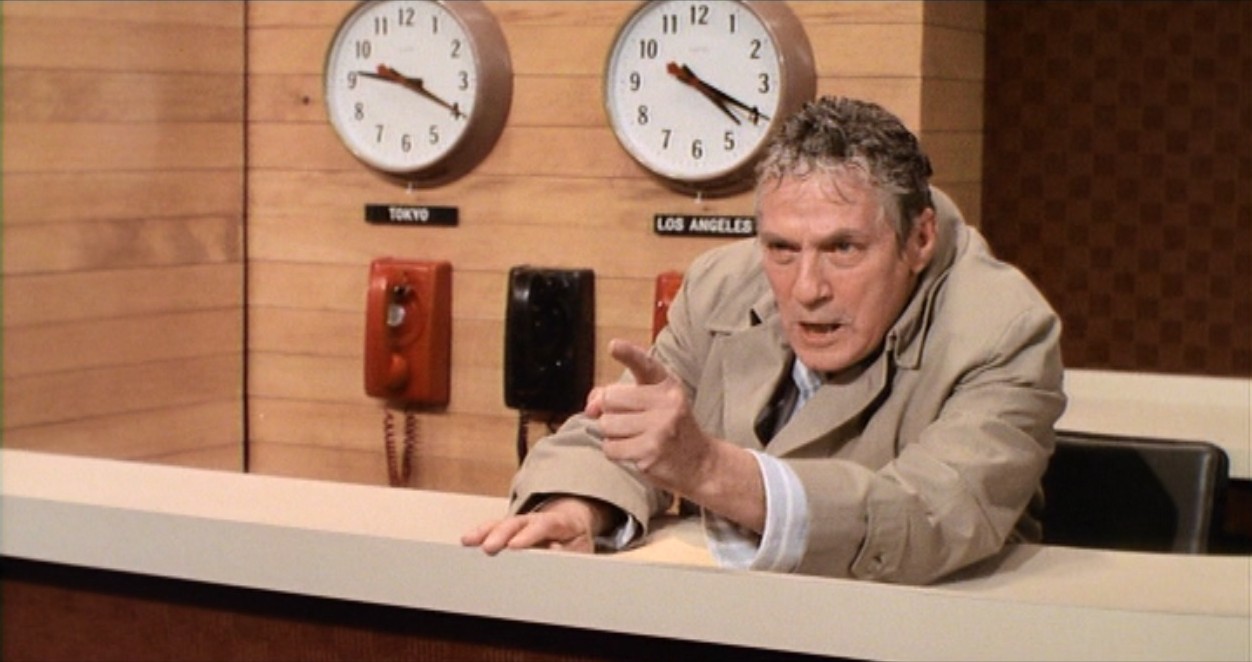 “The American people are turning sour, they’ve been clobbered on all sides by Vietnam, Watergate, the inflation, the depression. They’ve turned off, shot up, and they’ve f…ed themselves limp and nothing helps.” — Diana

“I don’t have to tell you things are bad. Everybody knows things are bad. It’s a depression. Everyone’s out of work or scared of losing their job. A dollar buys a nickel’s worth. Banks are going bust … We know the air is unfit to breathe. And our food is unfit to eat.”  — Howard Beale

“I want all of you to get up out of your chairs. I want you to get up right now, and go to the window.  Open it, and stick your head out and yell:  I’m as mad as hell and I’m not going to take this anymore!”  — Howard Beale

Network, in a way, is bizarre and weird sort of film. On the one hand, it’s a “typical” 1970s heavy-hitting issue-oriented drama, warning of the dangers of corporate takeovers of television news, especially when news is asked to serve a corporate balance sheet rather than take seriously it’s duty to inform the public. But whereas other 70s dramas, such as Norma Rae, Silkwood, and The China Syndrome all feel somewhat dated now – Network, if  anything feels somewhat precognitive. Large sections of Network remind me of the television series, Max  Headroom:  20 Minutes into the Future (made in England, but aired as first run in the US in 1987). Network has some very funny moments, but it also has some very sardonic moments. In a sense, the characters aren’t really people you root for or against, rather the film manipulates its audience to understand the point of view of the character speaking at the moment, only to reject that character’s argument a moment later and agree with the opposite viewpoint.

Network does have a lot of speeches, but they are often great. Not just Howard Beale’s speeches, which are memorable, but Ned Beatty as the chairman of CCA has a marvelous, scary, chilling speech about not just the world consisting of corporations instead of countries — but of money instead of idealogies. He sees a world of systems, not a world of people. A de-humanizing viewpoint, that seems all the closer now  than in the mid-1970s. Meanwhile, Beale calls for people to protest – not to march in the streets, but to yell out, “I’m mad as hell and I’m not going to take this anymore!” When people do, he gets his own show which becomes a sideshow circus masquerading as News; but this actually shows “the masses” as just so many sheep, doing what they are told, believing what they are told, dressing as they are told, buying the things they are told to buy, etc. Beale blames all of this conformity on television, and even has speeches against it; yet, I think that message of “manipulating the masses” cannot be laid solely at television’s doorstep. There are two reasons for this. One — similar messages come from other places: magazine ads, newspapers, even movies and pop fiction books; it’s not a message that solely comes from a single medium, though that medium is so prevalent that it can be easy to notice and point to. And, the second reason, is historic. Great social leaders of the past (even those on the “wrong side”) often had a way of articulating the feel in the air of the masses and manipulating that into action. So, Beale is, in essence, a fictional modern-day version of the leaders of the Russian Revolution, the French Revolution, or even the American Revolution. The difference with Beale is we, as an audience, expect him to be stopped. And he is. Though by the end of the film, there is no feeling of  “something terrible has happened to a great man who could have changed things”, rather his viewpoint, and his message are changed by the president of CCA to his philosophy – and that message is so unpopular with viewers, and lowers the ratings so much (and thus profits, since ratings determine the cost-per-minute of advertising) that Diana, the programming manager, and her cadre resort to desperate measures to get rid of Beale. The other aspect is, other than the shouting, and the rise and fall of Beale’s show’s ratings/popularity, no actual social movement ever develops. Beale even says, in various ways, “I don’t know what the solution is – I don’t know what to do to change things.” So, other than two distinct instances, his audience doesn’t know either, and no solutions, or social change is ever made.

The story of Network, is that of a fourth-place television network, that is going through major changes because they are losing so much money. On the one hand, a corporation called CCA has bought the network and in order to save money, moves the formerly independent News Division to programming. The news division itself  is also gutted. People are fired, whole entire foreign news correspondence desks are closed, and then, making it almost impossible for the reporters and producers to actually report the news accurately and without bias — it’s moved to Programming. Programming is the entertainment department of the network. Diana is a bright young thing, desperately trying to show her stuff, to be hard hitting (in a male-dominated environment, she’s the only woman and cannot ever afford to show her femininity), and desperately trying to pull the network out of it’s financial hole by trying anything. It’s very much the idea of – well, things cannot possibly get worse, we’re already in last place, we’re in the red, let’s try this. Only “this” is the craziest stuff you can imagine.  (Her other idea is a dramatic series featuring the weekly real crimes of a counter-culture-terrorist-criminal-“Marxist” organization.) Howard Beale has spent his entire life in network television news. Because his ratings are low, and he’s perceived as “old and stodgy” he’s given the news at the very beginning of the film that he’s to be fired, and he only has two weeks left on his show. He goes out with an old friend, the two get really drunk, and Howard says he’ll kill himself. His friend, not taking him seriously, says, “well, if you’re going to do it — do it on camera, I’m sure it will raise the ratings,” or words to those effect. The next day, during his regular broadcast, Howard threatens suicide, live, on the air.

What follows is the slow break-up of  a man. He continues to break-up, on camera, delivering these wonderful, crazy speeches. His friend, Max, is appalled and wants him committed, perceiving that Howard is truly losing it and having a breakdown. Diana, however, now running the programming department, discovers that Beale’s rants are having a positive effect on the ratings (again, ratings determine the profitability of the network by determining the cost-per-minute of advertising fees for selling ad-time). She manages to first get Beale a regular “Commentary” block on the news. As Beale’s ratings soar, and Diana’s influence grows, she eventually turns the news broadcast into a circus. Besides Beale’s rants, which are the centerpiece of the new “Howard Beale Show”, there’s “Sybil the Soothsayer” who predicts the next week’s news; Jim Webbing and his “It’s-Emmes-Truth” Department; and Vox Populi. This isn’t news — it’s a game show, a circus, but instead of being a disaster — it’s very popular, and again the ratings soar. Eventually, Beale starts attacking television itself, telling people to “turn off the tube”. You’d think this would be the moment where the ratings drop – but it isn’t. Then Beale discovers that CCA is being bought out by foreign nationals, specifically the Arabs, whom Beale had been blaming for weeks for the Oil Crisis (in the 1970s), and the resulting depression, and inflation (also in the 70s). He urges people to send telegrams to the White House to stop the deal.  The telegrams are sent by the bushel load. Eventually millions of telegrams arrive.

This one piece of actual social action, stopping a foreign power from controlling the news, actually works. However, the chairman of the board of CCA is angry. He knows the deal is important. He sees Arab investment in American holdings such as shipping, GM, CCA, etc. as a necessary way to put money back into the system. He basically forces Beale to change his tactics and his speeches and his rants, and speak “his truth”, “his philosophy”. Beale does, but in such a way that he depresses people and they tune the show out, and stop watching. The ratings drop drastically.

Diana is then thrown into a tizzy. She tries to find a replacement for Beale, to no avail. She tries to convince her bosses to cancel or fire Beale, and that doesn’t work. She then finally resorts to desperate measures.

Network also has a quasi-documentary feel because of the use of a narrator all the way through to report on exactly what’s going on, and to at times explain the plot. The narrator also gets some very sardonic lines, lines that almost make you laugh and then you realise that what you are laughing at is in no way funny. That device works extremely well in the film.

I highly recommend Network. Many of  the concepts of the film, such as foreign investment and control of the networks and the news have actually happened  (ABC for example is owned by Sony, a Japanese company). Even the idea of corporations and systems and that fight with people and individuals is very modern. And, as the quotes above show, certainly the true state of affairs, such as the frequent mentions of the depression and inflation of the 1970s, which are historic facts, should feel familiar to today’s audiences. The language of the film is a bit rough – there’s a lot of  swearing, and there’s also a affair between Beale’s friend Max and Diana. However, those scenes outside the network, such as the scenes between Max and Diana, tend to be slow, until he actually finally breaks up with her because he sees her as very artificial. Beale, also is not a sympathetic character because he is just a tiny bit too nuts. But his speeches are certainly great. And the nature of the masses is also commented on in a political sense rather than in any sort of real sense. But still a film that deserves to be seen. It’s one of  those films that could probably spark endless debate.

Finally, this is a very, very, intelligent film. That is not meant to suggest “boring”. The language itself, and the dialogue, is notable for it’s complexity and intelligence. Often television people are dismissed as idiots; in this film that is far from the case. One reason that all the opposing speeches seem so very convincing is that they are spoken by intelligent people who have reasons for their own viewpoints. The things Diana says, the things the chairman of  CCA says, the things Max says (representing the old guard), even Beale’s speeches give the audience something to think about, something to explore, something to further argue for or against or in the middle or even to suggest, “Well, how about this”. Network never talks down to its’ audience, even when explaining necessary plot points such as the Ratings system and its’ ties to revenue. Even the narration, which could have been very much a “talking down” voice, is rather a very sardonic one, used solely to add explanation to the plot, even dates. This is so refreshing compared to what is so common now where often television and film executives seem to not trust their audience, and to assume the audience (that is, the masses) is stupid. I love that about Network.

Recommendation:  See it!
Rating:  4 out of  5
Next Film:  North by Northwest