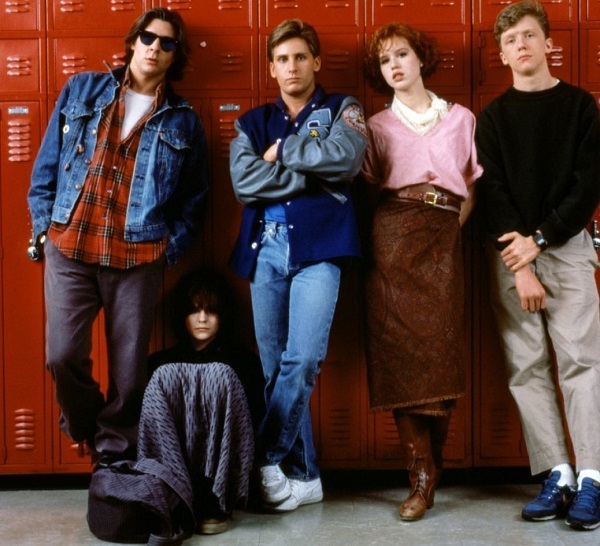 Five characters in search of an exit is a format for a play that’s pretty simple:  take a group of characters with nothing in common, and stick them someplace they can’t escape, and watch what happens.  The Breakfast Club does that by sticking five students with nothing in common with each other in the school library for a Saturday detention.  The students each represent a clique or group in a typical high school:  an athlete, a Princess, a brain, a criminal, and a basket case.  Nowadays — the athlete would be called a Jock and the brain — a geek, but overall the movie doesn’t even look dated, because teenagers are still teenagers.  The movie was also one of the very first to not romanticize being a teenager, but to portray teens in a realistic way with real problems.  But one of the best things about the film is that it evokes sympathy and empathy for all the characters — even the mysterious “basket case”.  The Breakfast Club challenges audience members, especially teens whom the movie was meant for — to see beyond the stereotypes they hold about each other, and see what they have in common, or to at least understand that someone else might have problems too.  Each of the teens in the movie has issues:  problems with their parents, problems with their friends, problems with their image –and the film addresses those issues and problems and gets them in the open.

Scene not to miss:  The lunch scene — each of them have a lunch that represents their group on a plate.

Overall, it’s a great movie.  This is a teen movie that means something.  Which is why it became so iconic.

Recommendation:  See it!
Rating:  4
Next Film:  Bringing Up Baby