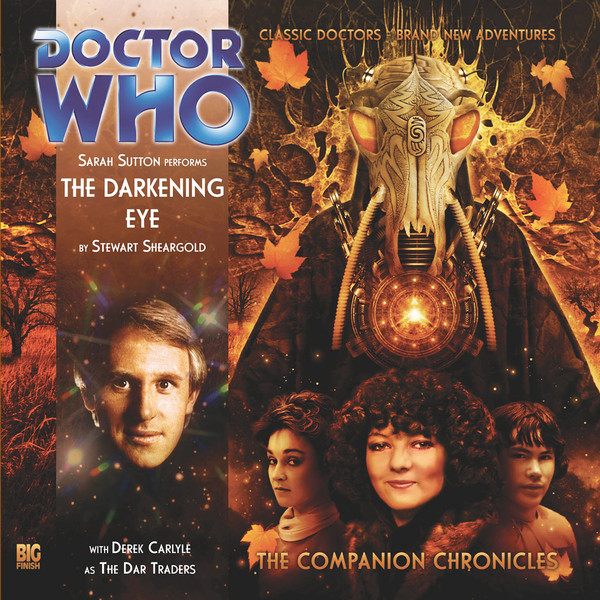 **Spoiler Alert** The Darkening Eye is from the Big Finish Companion Chronicles line and features Sarah Sutton performing the story as the Fifth Doctor’s companion Nyssa. The story features as well, the Fifth Doctor, Tegan, and Adric. However, the wrap-around story features an older Nyssa who is speaking to a patient with a usually fatal disease. The patient is terrified because the only known treatment for his unnamed disease is so harsh it often kills the patient. Nyssa tells him she had his disease and survived, then she explains her tale.

The Fifth Doctor (as played on the BBC series Doctor Who by Peter Davison) lands the TARDIS on an empty freighter in space. But no sooner than they land than everyone, even the Doctor, wants to leave. The freighter was hit during a space battle and is open to space. There shouldn’t even be any atmosphere but there is – the first mystery. And the Doctor detects time distortion or an anomaly. Nyssa, Tegan, and Adric want to leave anyway, and the Doctor agrees, but they meet the species providing the atmosphere – Dar Traders there to claim salvage of the dead. Tegan is appalled. Adric immediately assumes their culture is their culture and not something they should judge. Nyssa is simply trying to understand when the ship is hit. The hulk is broken in half with the companions left with the Dar Traders and the Doctor on the other side with the TARDIS. The Doctor mimes heading back to the TARDIS – and Tegan, Nyssa, and Adric are left with the Dar Traders. Using a magical mirror – the Companions travel to the Dar Traders ship. As this story is told from Nyssa’s point of view, we don’t see the Doctor for a while. On the Dar Traders ship, the traders want to determine if Nyssa is “alive” – they throw her into a cabinet and torture her. She survives this, and learns about the Dar Traders – they are obsessed with death, and will cure deadly diseases or injuries for a chance to see the “threshold” then coming back from death.

On the Dar Traders’ ship, they also encounter an assassin who has a Dwarf Star Alloy cabinet that keeps him alive.

The group heads down to the nearby planet so Nyssa, Tegan, and Adric can find the Doctor and the TARDIS. First, Adric is stabbed by the assassin, but recovers. Nyssa is also attacked as they make their way through the war-torn planet to find the Doctor. The Dar Traders bring Nyssa back. The group finds the Doctor and the assassin tries to steal the Doctor’s life force to power his cabinet. Unfortunately, Dwarf Star Alloy and Time Lord physiology don’t mix. Nyssa tries to prevent the disaster and nearly pays with her life, again. But the Dar Traders gift helps her to come back from near death and recover. Everyone piles into the TARDIS.

Nyssa, having explained to the patient she can help, offers – “Shall we trade?”

The Darkening Eye was a bit confusing, even on a second listen – though I must admit I did listen to this CD audiobook while driving in my car. And my commute is a short 22 minutes in good weather so it took a couple of trips to listen to the whole thing. Still, Sarah Sutton does an excellent job and it really is Nyssa’s story – the Doctor is barely there and the other companions are nearly minor characters. It’s just not as good a story as some of the Companion Chronicles.

Find out more about Big Finish audios at their website: www.bigfinish.com