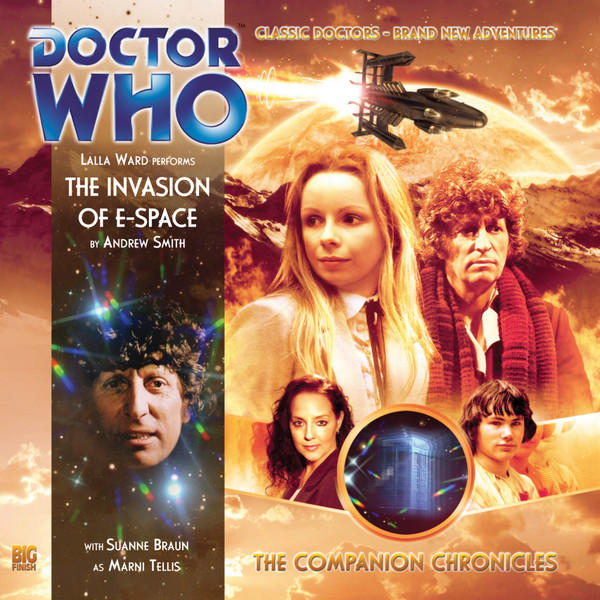 Leave a comment Posted on May 12, 2018January 20, 2019 Audio Play and Audio Book Reviews, Doctor Who, Doctor Who The Invasion of E-Space, Lalla Ward, Reviews

The Invasion of E-Space is a volume in the Big Finish Doctor Who Companion Chronicles line, featuring the Second Romana, the Fourth Doctor, and Adric. Romana, having left the Doctor at the Gateway [in the aired episode, “Warrior’s Gate”] ten or more years ago, and, having freed the enslaved Thralls, is about to go into battle. She records a message of another battle as a testament and a warning.

The Fourth Doctor, Romana, and Adric are in E-Space, looking for a CVE to use to travel back to their universe. Suddenly, a huge CVE opens up. But there are a lot of military and other spaceships facing the CVE. As we learn from the second narrator, Marni Tellis, a law enforcement officer, when the CVE appeared it devastated the planet, causing earthquakes, Tsunamis, and other natural disasters. Marni is a logical and practical person, so she’s surprised when she is summoned to give testimony about her recent case, a case of serial murders where the victims were killed by energy weapons and bladed weapons. Since similar murders were discovered on the inhabited moon, she is sent by shuttle there to investigate and report back.

The TARDIS is hit by the energy wave from the CVE and Romana and Adric are shaken up a bit, but the Doctor is injured. Romana has Adric help her take him to the zero room to recover. The TARDIS lands on Ballustra’s moon in one of the habitats and Romana and Adric are taken into custody. Marni interviews them, asking about the anomaly, which Romana explains is a CVE, and about the murders. Romana denies all knowledge of the murders but explains the CVE and its dangers. The interview is interrupted by something coming through the CVE – a lot of something, in fact, a Ferrian Raider fleet of teleport discs to transport in raiders to conquer Ballustra. Romana gives a warning, but she’s too late and the warriors appear. They kill a large number of people, but Marni escapes, briefly. Romana and Adric, we learn later, are taken captive by teleport to the Ferrian leader’s battle cruiser.

Marni calms herself, pulls herself together, and attempts to call other survivors. She’s attacked by Ferrian rocket fire. Fortunately, the Doctor rescues her. He takes her through the CVE on a recce. They discover a small Dwarf Planet with a noxious atmosphere that is home to thousands of Ferrian troopers. Marni thinks there is nothing they can do but go back and report what they saw. The Doctor has other ideas and sabotages the CVE generator.

Back in E-Space, Romana learns the Ferrian attacked Ballustra to obtain Gelintin (sp?) a rare mineral and power source. Extremely rare in N-space, it’s abundant on Ballustra. However, with the Doctor’s destruction of the CVE-generator, the doorway between universes is collapsing. Romana convinces the lead Ferrian that they must leave or they will be trapped with no supplies or backup and no way back. The Ferrian general agrees and orders a retreat. Romana and Adric escape in a lifeboat – but the Ferrians attack it. The Doctor rescues Romana and Adric and brings Marni home. Marni reports the entire incident united the if not exactly warring, but distrustful nations of Ballustra.

I enjoyed this story – it gave a hint of what else the Doctor and Romana ended-up doing in E-Space. It was also a rip-roaring SF adventure and a lot of fun. The story is performed in the normal Companion Chronicles two-hander style by Lalla Ward as Romana and Suanne Braun as Marni Tellis.

Find out more about Big Finish audios at their website: www.bigfinish.com.