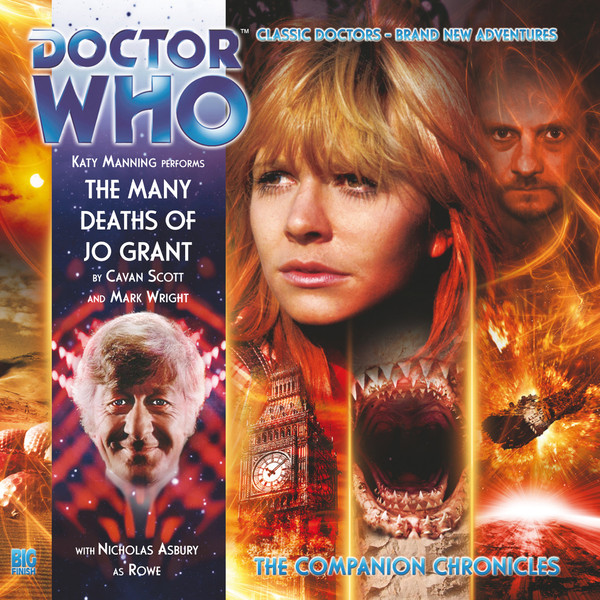 Leave a comment Posted on October 10, 2017January 25, 2019 Audio Play and Audio Book Reviews, Doctor Who, Doctor Who The Many Deaths of Jo Grant, Katy Manning, Reviews

**Spoiler Alert** The Many Deaths of Jo Grant is an audio in Big Finish’s Companion Chronicles series. The story opens at UNIT HQ, where the Brigadier is upset because the Doctor has left in the TARDIS and he needs him. Jo is waiting for the Doctor to return. But when the Doctor does return he brings a baby alien princess whom he’s rescued from her planet which has been invaded by fierce alien conquerors. No sooner than the Doctor arrives, though, than the aliens also arrive, threatening to destroy Earth to get to the baby. UNIT fights off the aliens who teleport into HQ as well as their space ship, but the aliens have fantastic weapons. Jo, the Doctor, the child, and a UNIT soldier named Private Rowe try to leave. Jo sees the Doctor in danger and sacrifices herself to save him.

Two more vignettes follow – in one Jo dies, thrown into a pit to be eaten by a giant mouth (it sounded similar to the creature in Return of the Jedi that Jabba threatens to throw Luke into.) In another instance, Jo again sacrifices herself – to save an alien planet, after the Doctor is unable to do it because he’s knocked out.

But each time, in each vignette, there are two re-occurring figures: Rowe, and a space-suited figure with a mirrored faceplate that only reflects Jo’s own face – not allowing her to identify the figure inside the suit. Jo also keeps experiencing deja vu.

Jo then wakes up in a space ship, exiting a strange pod, and meeting the Doctor. He explains she’s been trapped in a mindscape – a torture device that has been banned for centuries.

But they are soon confronted by Rowe, and he threatens Jo and the Doctor with a disrupter – the two fight and are seemingly both destroyed.

Jo wakes again. This time she sees that the Doctor is also in a pod. He had entered the Mindscape to rescue her and it was the Doctor in the mirrored spacesuit. Meanwhile, Rowe is an alien scientist, from the conquerors who are after the alien princess. Rowe’s people are selfish and have no empathy for others – especially the worlds they conquer. The idea of sacrificing yourself for something greater or to save someone else is so foreign to Rowe’s people they simply can’t understand it. So Rowe had put Jo into the Mindscape to study her. He had “killed” Jo in the device 412 times. But Rowe’s people are also experiencing troubles with the princess’s planet. The princess’s people, in desperation, are taking any ship they can and crashing it into Rowe’s people’s outposts, military depots, and weapon stores. This kills the pilot and any skeleton crew on board the ship but these kamikaze attacks are having an effect against Rowe’s people too because they are completely unprepared and do not understand the idea of sacrifice for a cause. Rowe was studying Jo to try and understand her feelings for the Doctor and her willingness to sacrifice herself for him.

In the end, the Doctor makes a deal with Rowe – he wins the baby princess’s freedom but promises not to take her home to her planet. He and Jo are also freed and will return to UNIT.

This was a good story, Katy Manning does an excellent job telling it, and although I felt she had Jo a bit too innocent at times (the story is set between “Carnival of Monsters” and “Frontier in Space” – and in “Frontier in Space” Jo really kicks butt – preventing the Master from hypnotising herself, rescuing the Doctor several times, she’s even instrumental in figuring out the solution to the problem) so this Jo should be more grown-up and capable, not the somewhat incompetent girl of “Terror of the Autons”. Still, seeing how much Jo cares for the Doctor and what she’s willing to do for him was well-played. It’s somewhat odd having the other actor in the story being Rowe – who’s several different characters or versions of the same character, but it does always help to have two people in a Companion Chronicles story. And like many of the stories in this range – it does have the feeling of a Missing Adventure book or a Past Doctor Adventures book which I appreciated. I hated seeing Jo die over and over – it seemed cruel, and I figure she’d have serious issues with dying 412 times – even if it didn’t “really” happen. But still, it’s a good story and worth checking out.

Find out more about Big Finish audios at their website: www.bigfinish.com