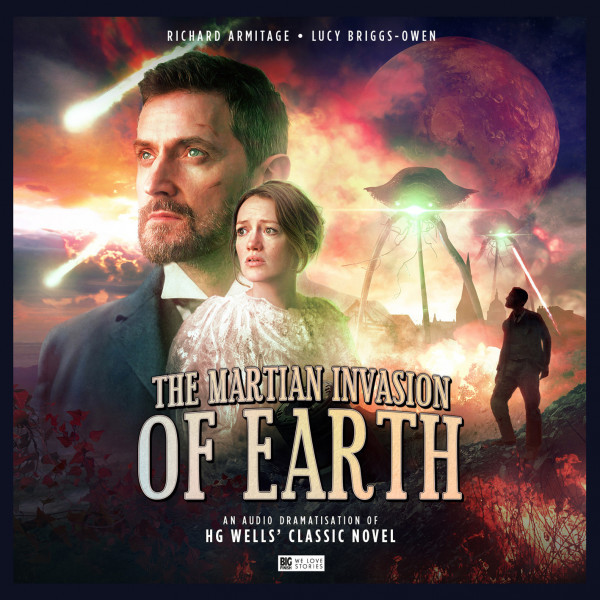 The Martian Invasion of Earth is Big Finish’s full audio play adaptation of War of the Worlds. They couldn’t use the actual title due to copyright reasons. The audio play is an adaptation of the original 1897 novel and thus is set in the UK. Herbert Wells and a scientist named Ogilvy are studying meteorites in the night sky when one seems to become a shooting star. They track it to a field or common in the country and find a fallen cylinder. Herbert hears movement inside the burning hot cylinder and goes off to find help. He finds a guy with a cart who completely and totally doesn’t understand the urgency of Wells’ request for help. This will be a reoccurring theme, as nearly everyone our main characters encounter who represent “normal” working people are complete idiots.

Eventually, a group of people gathers near the cylinder to help and begin working to get around or through the pit that surrounds the cylinder. One is the scientist, Ogilvy, who insists that any culture advanced enough to travel to another planet must be advanced and peaceful, therefore they must help. One of the workers falls into the pit, and the crowd tries to get him out. Even soldiers arrive in case the cylinder is a threat. The creatures inside do emerge and before long they attack the soldiers with their heat ray, a sort of invisible laser. Ogilvy is one of the first to die, as do many of the soldiers.

Wells and his wife, Amy, return home. The next day, it’s clear there is great danger from the cylinders as the Martians are now in metal machines that attack with their heat rays and clouds of deadly black smoke. They are also turning the countryside red by leaving behind some type of red weed. Wells urges Amy and his servant to leave. They get in a dog-cart and run, but during a storm spot a  Martian machine literally on the warpath. There’s an accident and the servant girl is killed, as is the horse, and the cart is destroyed and useless. Amy and Wells survive and begin to walk, hoping to find safety by getting to the coast. Herbert mentions his brother, Edward lives in London and that the Martians seem to be heading towards the city.

Meanwhile, near London, a woman named Agatha is trying to escape in her hot air balloon. She’s being swamped by other people who also want to escape. Edward Wells stops one of the men attacking Agatha and the two escape in the balloon. They are later attacked in the air by Martians, but Agatha sacrifices her nearly dead mother-in-law to escape. They reach the coast and try to get to a ship. Succeeding they will be at the center of a battle between the Royal Navy and the Martians and in the middle of a fleet of civilian ships that are trying to escape.

Herbert and Amy are simply trying to escape. They stay overnight at the house of a cleric, who loses it when he sees the actual Martian invaders. Amy and Herbert see people frozen and unable to move, then forced into pits. Herbert is even able to look inside an abandoned and partially scraped cylinder and finds dead beings with two arms, two legs, and a head – in other words, beings that resemble humans. They are the food of the bulbous Martians. The cleric attempts to give Amy to the Martians to save himself, but Herbert stops him.

Amy and Herbert leave, see that the Martians are moving to London, and attempt again to reach the coast. Herbert reflects that it makes sense the Martians would want to take over the greatest city in the greatest Empire on Earth. Once they reach the channel, Herbert and Amy strip to their underthings so they don’t drown, and attempt to swim the channel. They duck underwater to avoid the heat ray of the Martians. They are eventually picked up by a ship and get to France, where they run into Daniel, an Army sergeant they met before. He’s assembled a rag-tag group of soldiers and civilians to fight the Martians. Their idea is to shoot large guns straight up to hit the underside of the Martians – which is how they accidentally defeated one of the machines. It’s a good plan, but unfortunately, it doesn’t work as the guns explode instead, killing the men who load and aim them. Amy and Herbert see lights in the sky.

Amy is nearly panicked as she realizes there are Martian machines in the sky. But then, suddenly, everything stops. And the Martians simply collapse their ships and machines crashing to the ground. In a spoken coda, Herbert explains the Martians succumbed to Earth bacteria from the air they breathed and the human blood they drank. People returned from exile to the North of England, and the continent. Food was sent from the Continent and America to aid the recovery and things quickly returned to normal. But Herbert fears a second attack and urges that the government and scientific community keep an eye on the skies.

This was an excellent presentation of War of the Worlds – a familiar story since it’s been adapted many, many times. The British setting, which of course, is the original setting adds to the story as you have people in horse-drawn carts and on horseback battling Martians. But throughout the story, pretty much everyone Herbert and Amy meet is a complete and total idiot. They do occasionally get help from others, only to have that same person do something dumb because of their fears or just not quite understanding the situation. Edward and Agatha fair somewhat better – the Naval captain who does what’s right to save people instead of following his orders to retreat is one of my favorite characters (he also sounds like Captain Picard). But I wanted to see a fortunate reunion between the brothers Wells and for Amy to meet Agatha and that didn’t happen. I found myself wondering if Edward and Agatha even survived. I also found their story romantic! But overall, this is great story and I really enjoyed it. Recommended!