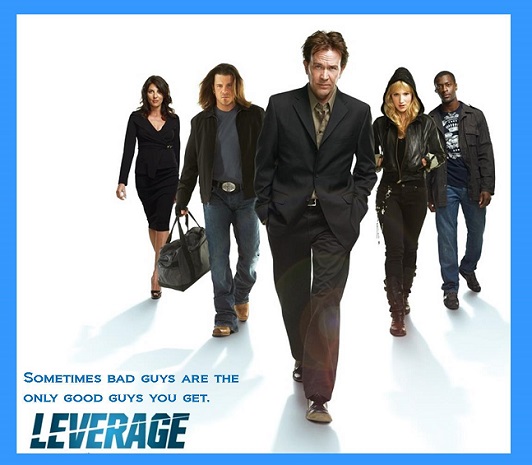 Nathan Ford was a high-powered insurance investigator, recovering stolen art so his company, Lys Insurance didn’t have to pay the claims until his son developed cancer. The company refused to pay for medical treatment for Ford’s son, and as a result, Sam Ford died. Nathan lost his job, his wife divorced him, and he slid into depression and alcoholism. Then one day, Nathan runs into someone with a similar story of being screwed-over by a rich company and having no legal recourse against it. So Nathan decides to help and recruits several thieves and con artists he had run in to in his former career. Thinking it’s a one-time thing with a big payoff, the four Nathan recruits – Parker, Sophie Devereaux, Alec Hardison, and Eliot Spencer agree to help out once. But the team soon realize that they have a good thing going and decide to continue.

Nate usually finds and brings in clients, but occasionally one of the others will find out someone they know needs help and suggests the potential client call “Leverage Consulting”. Often clients only want back the money or property they lost, or simply want the company to pay – such as acknowledging a mistake. Often the client can’t sue for various reasons (it’s too expensive, lawsuits take too long – often years, while what the company or person did was immoral or harmful it wasn’t technically illegal, etc.) But Nathan and his crew can provide what their clients want. Once Leverage Consulting accepts a client, Nathan plans out the con they will pull on the target. Sophie is the “grifter” – a gifted con artist and in the sphere of running cons actress. She also has experience as a high-end thief. Parker is the thief with experience in breaking into any sort of museum, vault, private collection, etc. Eliot is basically muscle, and also fills in where needed, sometimes as back-up for Sophie, other times as back up for Parker. Hardison is a computer hacker. He can also pull an in-person con, but he prefers to use his hacking skills. Hardison can also produce fake ids and other credentials as needed.

The show is great fun, with lots of action. However, it’s often intelligently written, with snappy dialogue, and complex, well-written, smart plots. Most of the time an episode will have a twist – the audience thinks it’s going in one direction, but it then goes in another direction. This will often involve what looks to be a major setback, but in reality, was something Nathan had planned in advance, often to further embarrass the target or to get them arrested by exposing illegal actions. Essentially, each episode of Leverage is a small heist film, that is filmed beautifully and uses great stunts and effects. But unlike some action-oriented films and television shows, Leverage is also smartly-written, which makes it very enjoyable.

I like Leverage a lot. I bought seasons 1 and 2 when the show aired and watched season 3 on TNT, but like many of TNT’s shows, Leverage could be hard to find. I decided to re-watch the show to see if I wanted to purchase the final three seasons. My answer is “yes”. This show is recommended, it’s fun, there’s plenty of action, the dialogue is witty and smart, there’s an emotional core to the stories because they deal with people who feel real and have real problems, it’s just a good show.