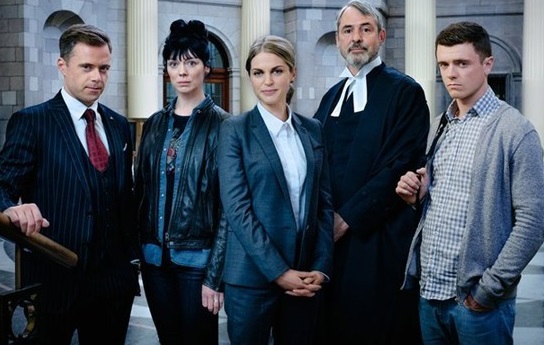 Tara Rafferty seems to have it all – a lucrative career as a solicitor at a prestigious Dublin law firm, wealth and privilege, and she’s about to marry Eric, the son of the head of her law firm, a man she loves. Then it all blows up around her. The series begins with Tara at her Hen Party (bachelorette party), she makes a snap decision to drop in on her fiancé but finds him in bed with another woman. Right there and then Tara calls off the wedding. The next day she moves her personal items and files out of her office.

Tara is now on her own, getting by any way she can, picking up clients as she goes. Her office is in the back of a coffee shop, and when one of her clients needs a job to stay out of jail, she hires him as her office boy. He recommends a friend to help her with some “IT stuff” and soon Tara has hired Meg as well as her investigator (and sometimes hacker). Tara has a good heart, and she cares about people – but she’s young and too trusting.

Meanwhile, Eric, her ex-fiancé, is essentially stalking her – he shows up at her flat, in court when she’s presenting a case (because the barrister didn’t arrive), and at her new office. Eric insists he “still loves her” and his fling “doesn’t matter”. Tara sees through this and tells him it’s over and to leave her alone – repeatedly. But Tara’s mother, her father, Eric’s mother, and even her friends tell Tara she should forgive Eric and go back to him. In addition, Tara keeps getting cases that in some way or another come back to infidelity. Even her clients tell Tara she’s better off with Eric and the privileged life he can offer her.

But Tara defies all the social pressure and discovers she likes being on her own. She likes helping fellow underdogs. And for the first time, she really enjoys being in charge of her own life and making new friends and keeping the one trusted old one that stood by her decision to cancel the wedding. You can’t help but like Tara and her motley crew: Ray the office boy, Pete the coffee shop owner, and Vincent the down on his luck alcoholic barrister who helps her present cases in court.

This is a brilliant series about a woman’s journey to find herself and to say no to social convention and pressure. I enjoyed it very much! Even though at times Tara seems like a bad or at least inexperienced solicitor (her clients keep lying to her and she keeps believing them), she’s also someone you can pull for and hope things work out for her. Her new friends are also great – even as they work through their own issues. Striking Out, like Tara Rafferty herself, walks it’s own path, becoming a unique series in its own right, and I whole-heartedly recommend it.