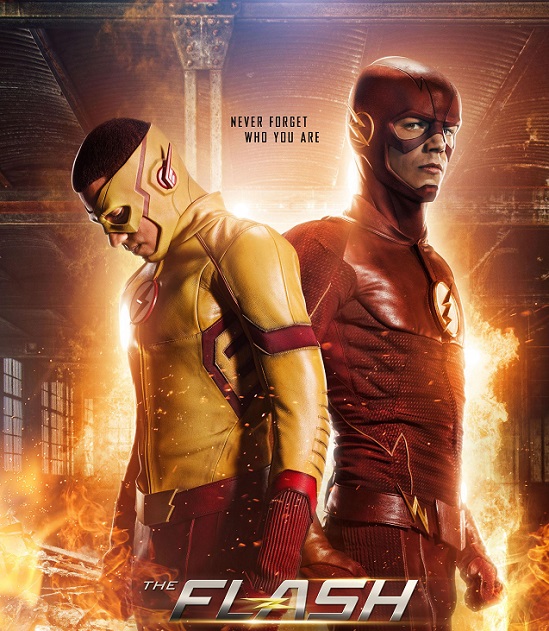 The third season of The Flash begins with Flashpoint, after his father is killed, Barry Allen travels back in time and saves his mother. He has three wonderful months with both his parents being alive, but eventually things don’t go so well, and Barry decides he’s made a mistake, so he has to reverse it. He releases the Reverse Flash whom he’s kept hostage and allows the death of his mother to happen. But when he returns to the new present things are different. Iris isn’t talking to her father, Joe. Cisco is extremely angry at Barry and grieving. Caitlin, unknown to the others at first, is developing cold powers and fears becoming Killer Frost. And at the Central City Police Department, Barry is now working under a new head of the CSI department, Julian Albert, a man that doesn’t like or get along with him.

At first, Barry is at a loss. But within an episode or two, Barry gets the team back together, and although things are not perfect, they are at least working together. It takes Cisco a little longer to come around (he lost his brother, Dante, as a result of Flashpoint), but he works with Team Flash anyway. Flashpoint has another effect – new metas are appearing in Central City, and the police forensic department is finding husks that are somehow linked to these new metas and a villain called “Alchemy”. Barry suddenly realizes that the new metas had existed in Flashpoint.

There’s more investigation, and it becomes apparent that Julian is Alchemy but he’s merely a harbinger and servant to Savitar – the God of Speed. Julian had become obsessed with an artifact known as The Philosopher’s Stone, but when he found it on a dig in India, his entire archaeological team died, and unknown to Julian, he became Alchemy. Julian is brought in to Team Flash and the fight against Savitar. Meanwhile, Caitlin’s cold powers become more obvious. At first, she takes a pair of meta-power damping bracelets to suppress her powers. Later, Cisco makes her a necklace. Wally also becomes Kid Flash – as he was in Flashpoint.

But once the Alchemy plot is resolved, and the fallout from Flashpoint largely settled, the main focus of the season becomes clear: Savitar. In an attempt to destroy The Philosopher’s Stone, Barry is thrust into the future and he sees Savitar murder Iris. Saving Iris becomes the focus of the rest of the season. Team Flash tries to change the future, by changing the other headlines Barry saw on a TV news broadcast when he traveled to the future. There are villains of the week to defeat, but the majority of the plot is devoted to preventing Iris’s death, and figuring out who or what Savitar is and how to stop him. Barry even travels to the future again, and discovers just how messed-up everyone is without Iris – and how broken, he, Barry, is. By the end of the season, it becomes clear who Savitar is: he’s a time remnant of Barry Allen – and essentially a time paradox.

The last two episodes of the season play like one big 2-hour finale, even though there is no “to be continued” title card at the penultimate episode. In the second-to-last episode, we see the events from a few months before – and Savitar kills Iris despite Team Flash finding a physicist, Tracy Brand to build a speed cannon to defeat him. But, it turns out to not be Iris but rather HR Wells, using a projector to hide his appearance and take Iris’s place. Tracy, who was starting to fall in love with HR was devastated. But now that Iris is alive, it changes things – and essentially Team Flash is waiting for the Time Paradox to catch up and for Savitar to disappear from reality. Savitar tries to save himself at the last minute – but Barry shows him mercy and even invites this other scarred Barry on to Team Flash.

This doesn’t go well, and Savitar kidnaps Cisco. But Cisco gets through to “Killer” Frost. At first, it looks like Caitlin will still choose Savitar, but in the end she doesn’t. Julian develops a cure for her, but she also chooses to return it to him, deciding to keep her frosty personality, but maybe without the “Killer” part. Barry has a final fight with Savitar, defeats him, turns away and is nearly killed – until Iris saves Barry by killing Future Evil (Savitar) Barry.

You’d think all would be well, but as Barry and Iris start to discuss wedding plans – a speed force storm erupts and threatens the entire city. Barry voluntarily goes into the Speed Force to fill the prison that Savitar left empty.

Season three of The Flash had it’s ups and downs. Although having Yet Another Evil Speedster seems like a bad idea – I had less of a problem with that than the main plot point being the threat to Iris’s life. The majority of the season seems to rest on the idea that no matter what Team Flash does – they can’t change things enough to save Iris – and the future is fixed. But, we know, Iris is a main character – and she’s not likely to really “die”. Throughout the history of DC Comics – Iris West is Barry Allen’s wife, not his girlfriend – and whether she is “Iris Allen” or “Iris West-Allen” she is his wife. So, despite this “big threat” that she will die – it’s an empty one, we know that she won’t. It is possible to make something interesting to see how she will survive, and HR’s sacrifice to save her is actually a surprise – but that she survives isn’t really a surprise.

That Savitar turns out to be Barry almost doesn’t work – it explains how Savitar knows everything Team Flash will do – he simply remembers what happened. But it’s actually “Killer” Frost who gives the game away – when she says everything Barry will say, as he says it, she’s actually giving Barry a big hint as to who Savitar is. Plus the Savitar-is-Barry plot actually mirrors the Wells/Thawne/Reverse Flash plot from season 1 – but this time in a sense we see the time travel paradox from Barry’s point-of-view, and Savitar is Barry as Reverse Flash, which in some ways works but in a lot of ways does not fit Barry’s character. Barry, despite his dark past, is one of the happiest characters in DC Comics. And, although it makes sense that in a fit of despair, after the loss of his father, he would go back in time and create Flashpoint, it doesn’t follow that he would then become Savitar, especially as Savitar originally exists in the Flashpoint Universe – which is the one where Barry’s parents are both alive and Barry doesn’t have super speed.

However, despite that, and season 3 of The Flash being darker than previous seasons, I still enjoyed it. Watching the development of Iris and Barry’s relationship is joyful. Wally West, especially once he becomes Kid Flash is awesome. I like Julian and HR as members of Team Flash. Caitlin’s story was well told – and I liked, a lot, that she was given agency throughout her story. She was able to choose if she’d be “Killer” Frost (though it’s Julian who causes the manifestation of her powers), and, more importantly, it’s Caitlin who decides not to take the experimental “cure” to remove her powers. It would have been so easy for someone to simply shoot the cure into her – but The Flash didn’t go that route. I also really liked Tracy Brand as a character, and I hope we see more of her in Season 4, but I doubt we will.

Follow this link to read My Review of Season 1 of The Flash.

Follow this link to read My Review of Season 2 of The Flash.