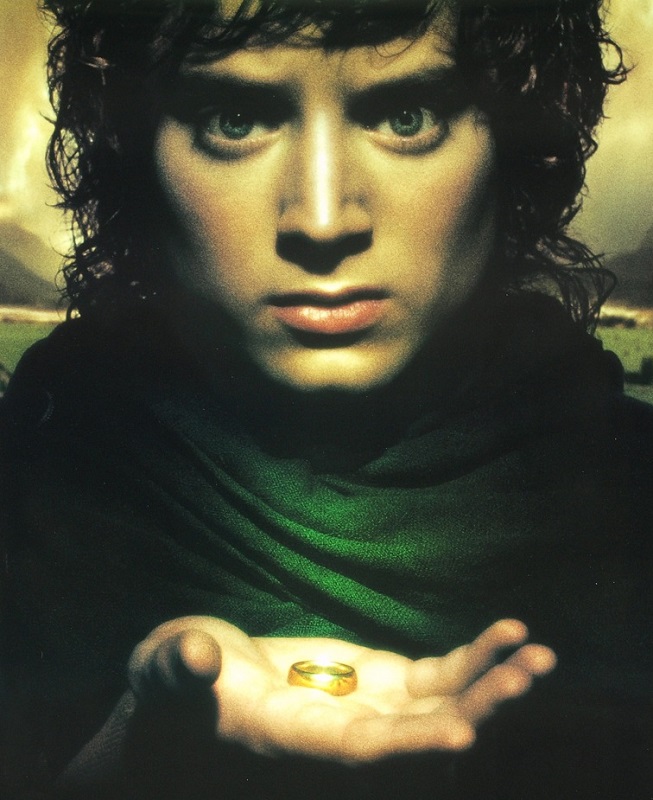 “Nine rings were given to the race of men, who, above all else, desire power.”  — Galadriel, spoken intro.

“Why do you fear the past?  You are Isildur’s heir, not Isildur himself.”  Arwen to Aragorn

“It was pity that stayed Bilbo’s hand.  Many that live deserve death.  Some that die deserve life.  Can you give it to them, Frodo?  Do not be too eager to deal out death and judgement, even the very wise can not see all ends.”  Gandalf to Frodo

Peter Jackson magnificently visualized J. R.R. Tolkien’s classic three book work, The Lord of the Rings.  I have both the theatrical 2-disc version and the 4-disc extended version of all three films, so I will be watching them all (first the 2 discs then the 4 discs).  I also watched “Fellowship” on Thursday, but then Friday and this morning were super-busy so this is the first time I’ve had to sit down and write.  I’m a fan of the original books, having found The Lord of the Rings in my junior high school library and reading it for the first time.  I then tended to re-read it about every three years or so.  The books and the films are excellent.  Peter Jackson did not have an enviable job — having to satisfy two distinct groups with his films — fans of the books, some of whom knew every single detail of the books intimately (Not to mention the Tolkien scholars in various disciplines) but also movie-goers who may have never read the books.  This is a hard path to tread.  Yet Jackson succeeded in making incredibly movies.  And I, like others who know the books can nitpick the films.  But I will try to leave my nitpicking for later.

The Fellowship of  the Ring is a beautifully shot film.  New Zealand perfectly plays the part of Middle Earth and the scenery is gorgeous!  The filming really feels like a love letter to New Zealand, and in a story where sense of place is important, it’s great to have such a special place to film.  The film is also perfectly cast, with some unusual choices.  In fact, many of the actors in the film, though experienced, were virtual unknowns — or hadn’t done much for years.  I remember when I heard about the film and the cast — I think the only ones I’d heard of were:  John Rhys-Davies, Cate Blanchett, and Sean Astin (whom I knew as Patty Duke’s son and a child actor).  But having a, for the most part unknown cast, and a cast of character actors, makes it easier for the viewer to imagine and picture the actual characters.  The music by Howard Shore is also gorgeous!  I have all three soundtracks on CD, and on my iPod and I still listen to them.

The opening, with narration by Galadriel (Cate Blanchett) is particularly well-done and serves as a crash course introduction to the history and mythos of Lord of the Rings, drawing in material from The Simarillian, The Hobbit, and even the appendices of LotR.  It’s an excellent piece of film-making because it draws you in, at once, while at the same time providing needed background information without which, especially someone new to the story would be completely lost.  After the introduction, the film slows a bit, showing us the Hobbits, who are preparing for a major party.  This is one departure in the film from the books.  In the book, not only is it Bilbo’s birthday (he’s 111), but it is also Frodo’s birthday (he’s 33, the Hobbit age of maturity, when they can inherit).  Bilbo literally disappears, returns to his home at Bag End, and decides to go off on a holiday, to see the Elves again and finish his book.  Gandalf, who had attended the party, meets Bilbo and insures that he leave behind the Ring he had obtained from Gollum.  Gandalf asks Frodo to keep the Ring safe, but never use it, and says he must do research.

Now in the books, another twenty years or so pass, in the film the time jump is, understandably, not that long.  Gandalf returns and sends Frodo and Sam to Bree, promising to meet them there.  Gandalf  has warned Frodo to stay off the road, and that Ringwraiths are on his trail.  Gandalf goes to see Saruman, only to discover the Wizard has turned evil and to get himself  imprisoned. Meanwhile, Frodo and Sam meet up with Merry and Pippin, two more Hobbit friends of theirs (who had also attended Bilbo’s party). They are confronted with Ringwraiths, but manage to escape.  At Bree, they discover Gandalf has not arrived, and they meet Strider (aka Aragorn), a Ranger.  Aragorn takes them out in to the wild, heading for Rivendell.  At Weathertop, Ringwraiths attack again, and Frodo is wounded.  The group continues on, meeting Arwen, and there’s a mad rush to get to Rivendell, with Ringwraiths following.

At the Ford, Arwen carries Frodo across, the Ringwraiths follow, and when they enter the water, Arwen says a spell which causes the water to rise, forming white horses to counter the black horses of the Riders.  The Ringwraiths are stopped but not destroyed.  Frodo then wakes in Rivendell, an Elvish city, with his friends around him, including Bilbo.  Legolas, an Elf, and Gimli, a Dwarf, as well as Boromir from Minas Tirith in Gondor (the “White City”, so called because it’s made of white stone and marble), are also in Rivendell for a council to decide what to do about the Ring.

The sequence of the council is beautifully done, as each person begins to make a case for what to do with the ring (Boromir, for example, wants to take it to his city to use as a weapon against the enemy), before the council erupts in pointless bickering.  Frodo sees an image in the ring of the reflection of everyone arguing, being swallowed by flame.  Seeing this he announces that “I will take it,”.  This stops everyone flat, and Aragorn, Boromir, Legolas, and Gimli, all offer to help Frodo on his quest.  Sam leaps up from where he had been hiding and also insists on joining Frodo.  Merry and Pippin rush in also to join Frodo.  Gandalf joins the group as well.  Thus it is set, a fellowship of nine, to counter the nine Ringwraiths, and representing all the primary races of Middle-Earth (Elves, Dwarves, Men, Hobbits, Wizards).  They are The Fellowship of the Ring.

The journey begins with knowing they must somehow cross the great mountain range of the Grey Mountains.  First, they try going through a mountain pass, but are caught in a snow storm, partially caused by Saruman.  Given a choice between trying for the Gap of Rohan (which Gandalf says is guarded), and making for the Mines of Moria – Frodo chooses Moria.  This is not the best choice.  Outside the mines they are attacked by a fierce water creature (a cross between a Hydra and a giant spider), barely escaping and getting into the Mines, they discover a fierce battle has occurred.  But they must go through.  The group is attacked by Orcs and a cave troll and must run for the bridge of Khazud-dum. Though the bridge is cracked, and missing parts, and a Balrog (a fiery demon) lies in the deep below it, the group manages to barely make their escape.  However, Gandalf is pulled into the deep by the Balrog. After the horrors of  Moria, the Fellowship make their way to Lorien.  They rest and recover there, and are given gifts (the gift-giving is more elaborate in the books).  Frodo is tested by a vision in Galadriel’s mirror; and she is tested by the ring and passes the test.  They take Elvish boats down the Great River finally making a landing just above a waterfall.  Boromir tries to take the ring from Frodo, Saruman’s Uruk-hai attack, and the Fellowship is split apart.  Boromir, confesses to Aragorn what he’s done, Boromir seeks and gets absolution, but he’s also killed in the ensuing battle.  Frodo and Sam head off on their own to Mordor.  Merry and Pippin are captured by the Uruk-hai, and Aragorn, Legolas, and Gimli will follow to rescue them.

Recommendation:  See it!
Rating: 5 out of 5 Stars
Next Film:  The Lord of  the Rings:  The Two Towers (2 Disc Theater Version)