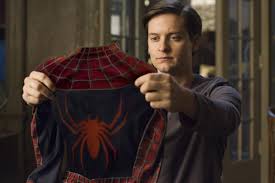 “Some spiders change colors to blend in with their environment, it’s a defense mechanism.” — Peter Parker
“Peter, What makes you think I would want to know that?”  — Harry Osborn
“Who wouldn’t?” — Peter Parker

“This guy, Flash Thompson, he probably deserved what happened, but just because you can beat him up, doesn’t give you the right to.  Remember — with great power, comes great responsibility.” — Uncle Ben

Peter Parker is painfully shy, and a bit of a nerd but he’s also a talented photographer and has the mind of a scientist — curious about the world and always wanting to know more.  He’s being raised by his aunt and uncle, and no mention is made of what became of his parents – I assumed they were dead.  Mary Jane, or MJ, is the proverbial girl next door, who’s harassed to the point of abuse by her father and boyfriend (MJ really doesn’t know how to stand up for herself).

One fateful day, Peter’s class, including MJ and Peter’s extremely wealthy friend, Harry, are on a field trip to a New York City genetics lab, which has been working on combining genetic traits from different spiders to create a “super spider”.  The spider gets loose and bites Peter.  Harry also starts talking to Mary Jane, at first to show Peter how easy it is — later, because he likes her.

That evening, Peter feels sick, but the next day he wakes up with extraordinary spider powers.  He and Mary Jane talk briefly (he’s bringing out the trash, she’s escaping her abusive father) only to have MJ run off when her boyfriend Flash Thompson shows up with his new car which he received as a present. Peter thinks of getting a car, and makes himself a simple costume so he can enter a wrestling match to win some money.  He wins, but the fight promoter cheats him out of the majority of his cash prize.  Just after Peter leaves the manager’s office, another man rushes in and robs the guy at gunpoint.  Peter could have stopped the thief, but he lets him get away (in part because he’s mad at the loss of the prize money).  Later that night, Peter returns to the library where his Uncle Ben is supposed to pick him up and discovers Ben dying.  Peter, in his masked outfit, tracks his uncle’s murderer — it was the same man he let go.  Peter throws the man through a window and he falls several stories to his death.

But Peter, remembering Uncle Ben’s words about responsibility, decides to become the crime-fighter Spiderman.  He’s improved his costume, refined his techniques, graduated from high school, and moved to New York City with Harry.  MJ has also moved to New York, but her dreams of becoming an actress have hit the harsh reality of being a waitress, just to eat and pay rent.

Spiderman is introduced to New York by a montage of  scenes of him stopping crime, and “man-on-the-street” interviews.  Eventually always cash-poor Peter Parker sees an ad in the Daily Bugle requesting pictures of Spiderman.  Peter rigs an automatic shooting camera and sells his pics to Jameson, the Bugle’s cigar-smoking editor.  He gets a $300 freelance fee.  Well, it’s a start.

Meanwhile, Norman Osborn, Harry’s father, is having troubles.  His company is about to lose a lucrative military contract.  Seeing no other choice, Norman tests the human enhancing formula on himself.  He nearly dies and it gives him a “split” personality — turning him into the evil green goblin.  The Goblin bombs his company’s rival, Quest, destroying their Ironman-like exoskeleton (not to mention several people who work there, a pilot, and the general who wanted to take away Oscorp’s military contracts). Upon returning, as himself, to Oscorp, Norman Osborn discovers his board is ready to sell the company to his rival and oust him as CEO.  Osborn goes bananas.

During the “World Unity Festival” the Green Goblin attacks, threatening and killing innocents as well as members of the Oscorp board.  Spiderman arrives and tries to save as many people as possible (and he saves Mary Jane, who is now dating Harry Osborn).

Aunt May gets Harry, Norman, MJ, and Peter together at Harry and Peter’s New York apartment for Thanksgiving.  It’s a disaster.  Everyone nearly finds out who Peter is; Norman accuses MJ of only being interested in Harry for his money; and MJ hears Norman’s accusations and Harry’s lack of protests.  A good time is not had by all.  Shortly thereafter, the Green Goblin puts it together that Peter is Spiderman and attacks MJ and May.  Both survive but only just.

In the final conflict between Spiderman and Green Goblin, the Goblin gives Spidey a choice — save MJ or save a tramcar full of kids.  Spiderman manages to save both.  Goblin and Spidey fight.  Spidey loses half  his mask, Norman takes his off  and tries to convince Peter he’s somehow not in control.  But, it’s a trick — Peter’s Spidey-sense warns him in time and he moves out of the way and the glider’s spikes miss him.  Norman Osborn isn’t so lucky, host by his own petard, he dies.

At the funeral, Harry blames Spiderman for his father’s death, but promises to remain friends with Peter. Mary Jane also tells Peter she loves him, but he tells her he only wants to be her friend.

For some reason, the first Spiderman film seemed better the first couple of times I saw it, but in later viewings, including this one, I saw it’s faults.  Going backwards through the film — the scene between MJ and Peter at the cemetery seemed so fake that I almost expected Peter to wake-up and realize it was a dream.  Peter’s pined after MJ since he met her (at the age of  six), yet when she tells him she’s completely in love with him, he tells her “let’s just be friends”?  Uh-huh, right.  And Mary Jane’s throwing of herself at Peter also didn’t feel right.  Second, Jameson is a bit of  a cardboard/cartoony secondary villain — sure, we know he only wants to sell papers, and painting Spiderman as a villain will do that — but it makes no sense, given the evidence.  Third — I have never bought Spiderman’s origin story.  A bite from a genetically-enhanced spider would probably kill you from it’s venom.  (Or a radioactive spider would give you cancer).  I really don’t think it would transfer “spider powers” to a teenager.  But I can suspend disbelief on that, you often have to for superhero movies.

The performances, on the other hand, are good.  I liked Tobey McGuire’s Peter Parker — he made the nerdy photographer/science student seem real, as well as flawed.  Kristin Dunst did the best she could given how Mary Jane was written.  And honestly, she often lights-up the screen.  MJ often seems like a victim of everyone around her, but it’s not her fault she’s given three boyfriends, an abusive father, and a complete inability to stand up for herself or fight for the right to own her life.  I also enjoyed the bit players and cameo artists, especially Ted Raimi, Bruce Campbell, Stan Lee, Cliff Robertson as Uncle Ben, and Aunt May.