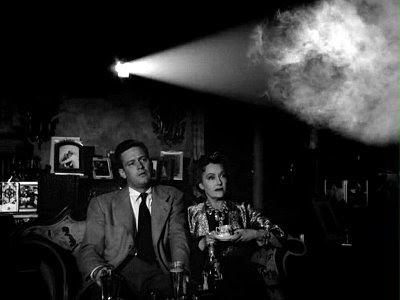 “I just think a picture should say a little something.”– Betty
“Oh, one of the message kids, just a story won’t do.  You’d’ve turned down Gone with the Wind.”– Joe
“No, that was me.  I said, Who wants to see a Civil War picture.”– Sheldrake

“I am big, it’s the pictures that got small.”– Norma Desmond

“Still wonderful, isn’t it?  And no dialogue.  We didn’t need dialogue, we had Faces.”– Norma

“Audiences don’t know somebody sits down and writes a picture.  They think the actors make it up as they go along.”– Joe

Billy Wilder’s Sunset Boulevard is one of the best movies made about movies, ever.  It’s also an excellent Film Noir, filmed by one of Film Noir’s best directors, Billy Wilder. The dialogue sparkles, and much of this film is quotable.  The characters are sympathetic, but doomed – as is characteristic of Noir films.

Sunset Boulevard is the story of Joe Gillis, down on his luck Hollywood screenwriter, and Norma Desmond – once queen of the silent silver screen, now all but forgotten in her decrepit Hollywood mansion. The film opens with a shot looking up at a dead body floating in a swimming pool. Narration sweeps the viewer into the story, telling us how Joe ended up in the swimming pool. Yes, this is the second time Wilder’s started a film with his protagonist dead or dying and used narration to explain how he wound up in such a state (the other being the wonderful Double Indemnity). Joe’s a writer, but he’s hit a “slow” point, so much so that he’s three months behind on the rent on his apartment, and his car is about to be repossessed. Without his car, Joe’s in trouble, so he dodges the finance company, which leads him to Norma Desmond’s mansion — he gets a flat and pulls into her garage.

Norma, once Queen of Silent Films, has now gotten old and lives in seclusion with her butler, Max. Joe introduces himself to her, recognizing her, but really has no interest, he only wants to hide out until he can get the money to pay what he owes on the car. But Norma is fascinated by this young man, thrown into her clutches by fate. When he tells her he’s a writer, she shows him her script for “Salome”. It’s truly dreadful, and about 600 pages too long, but Joe reluctantly accepts a job as editor/re-writer/ghost writer.

And thus begins Joe’s descent. He becomes a “kept man”, with Norma buying him gifts of fancy clothes, jewelry, watches, cuff  links, etc. Joe, a “plain speaking” sort, isn’t impressed with Norma’s gifts, but he’s caught in her web and helpless to get himself out.

At the beginning of the film, just prior to meeting Norma, Joe has a meeting at Paramount Pictures with Mr. Sheldrake, to plug his new baseball picture. The meeting goes nowhere, though he meets Betty Schaefer, a script reader with aspirations to be a writer. They meet later in the picture, when Betty tries to convince Joe to develop about six pages of his failed script into a full-length movie. They meet again and begin to work on the new script together, and even start to fall for each other. But their relationship is doomed because she’s engaged to his best friend, Artie (Jack Webb); and Joe, though he’s not in love with the much older Norma Desmond, feels a certain responsibility to her.

Every time it seems that Joe might break away from Norma… and find happiness with friends his own age like Artie and Betty, he’s drawn back.

Meanwhile, Norma lives in the past, watching her movies on a theater screen in her home. (Something Joe scoffs at… one wonders what he’d think of the VHS/DVD/Blu-Ray market today?) She even performs live shows for Joe once in awhile. Once a week, what Joe describes as “her waxworks” come to play bridge, they are cameos of other classic silent era film stars. Norma is an aged beauty, and she hasn’t handled the fact well. Partially because of Hollywood’s standards of young perfection, but also partially because she was never able to change with the times or re-invent herself. Which is a fate of many Hollywood stars, especially women.

Norma finally drops off her script for “Salome” in person to Cecil B. De Mille (played by De Mille himself). When an aide at Paramount calls her, she instructs Max to hang up… playing hard to get. She later goes to the studio in person and meets De Mille. While he’s checking out the calls she’s received, an old lighting gaffer recognizes her, and turns a huge floodlight on her. Soon behind-the-scenes people and actors alike are flocking around her with cries of, “Norma Desmond!” and “It’s Norma Desmond!” and “I thought she was dead!”. De Mille, meanwhile, discovers that the calls were about her car… someone wanted it for a Crosby picture. De Mille decides to save Norma’s feelings by not telling her, and even promises to shoot “Salome” after his current film.

Norma returns home and books every type of beauty treatment she can. Joe gets even more frustrated, but won’t leave, he can’t leave.

Finally, Joe starts sneaking out during the evening to meet Betty and work on their script, “Dark Windows”, a romance. They start to fall for each other. But Joe doesn’t want to break up the engagement between Betty and Artie. Norma also becomes jealous and even calls Betty to tell her “what kind of man he is”. Joe catches Norma at this, invites Betty over, then cruelly explains his circumstances. He’s driving her away because Artie’s a nice guy. After Betty leaves, Joe goes to his room, grabs his suitcase, and begins packing – taking only his own clothes, and leaving the rest. Norma has a fit… and in her anger, shoots him three times (and thus, Joe winds up in the swimming pool). Later, reporters, police, detectives, and others gather. By this time, she’s gone completely mad and has no idea where she is or what’s going on. Max, her director, and first husband, directs her down the stairs, and with newsreel cameras rolling, she delivers her speech about how great it is to be back in pictures, and the film’s immortal last line:  “Just us, and the cameras, and those wonderful people out there in the dark.  All right, Mr. De Mille, I’m ready for my close-up.”

Sunset Boulevard is brilliant. It’s dark, and chilling, and Joe, a perfectly nice guy, a writer from Ohio who came to Hollywood to make it big, and died in a swimming pool, is both a warning and a ideal protagonist. The film’s theme is broken dreams: Norma became a star at sixteen, but now she’s fifty and has no one, and no concept of how to live in the world. Joe only wanted to become a working writer in Hollywood, and, well, didn’t. The film is the antithesis of  the rags-to-riches tale that is so popular in the American psyche and in Hollywood films and musicals in particular. It’s also a tale of how Hollywood uses beautiful women and then spits them out to replace them with someone younger, and more beautiful (though that’s implied not explicit). I love this film, and Billy Wilder’s directing. And, again, as in most Film Noir films, the dialogue sparkles.

I highly, highly recommend Sunset Boulevard. If you’ve never seen it, make a resolution to watch it, you won’t be disappointed.

Recommendation:  See it!
Rating:  5 of 5 Stars
Next Film:  Superman/Batman:  Apocalypse