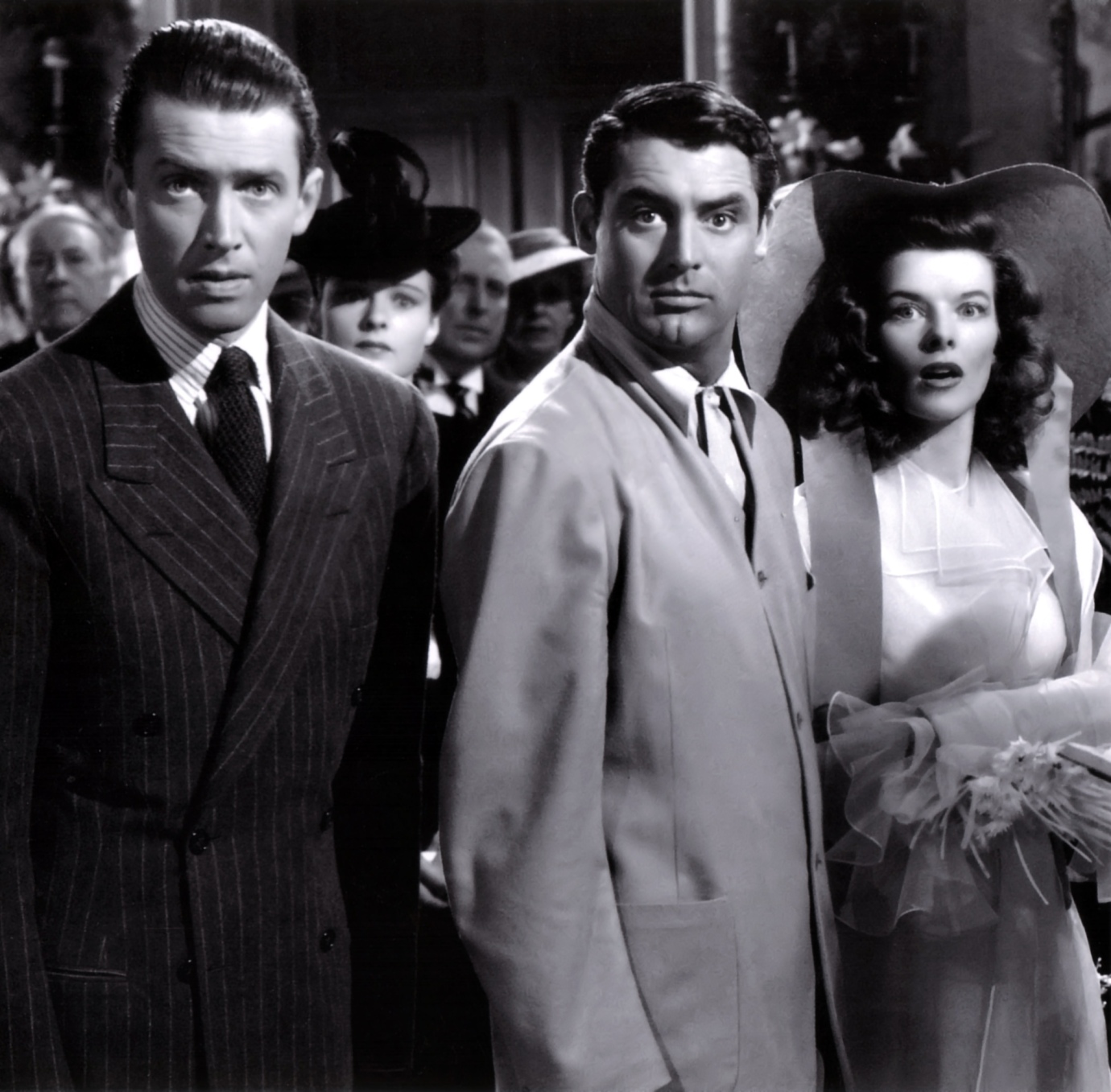 Grant, an alcoholic playboy, returns to Philadelphia from two years abroad, because he wants to rekindle his relationship with her and stop her wedding. However, he’s not completely obvious about what he wants.

Stewart’s a newspaperman, a reporter, who dreams of being a real writer and has written one book of short stories. But he’s currently working at a gossip magazine and is paired with a female photographer. He’s bribed to cover Tracy’s wedding.

Grant and Stewart arrive at Tracy’s – however, the pacing of the film is slow, much slower than is needed for the type of “screwball” romantic comedy that Cukor is trying to build. I think the film may have been better off in the hands of Howard Hawks. Or, for a melancholy feel, Billy Wilder. But in Cukor’s hands, it clunks along.

There are some very funny, witty, clever lines of dialogue – but there are also scenes that make one wince, such as Grant insulting Hepburn until she cries – and he’s supposed to be in Philadelphia to woo her back?

Hepburn, meanwhile, starts off as a nearly liberated woman, wearing silky pantsuits, and telling her mother and younger sister, that she dis-invited her father from the wedding because of his affair.

Meanwhile, Hepburn ends up having an illuminating conversation, not to mention a few kisses with James Stewart, while she’s drunk. The next day, her wedding day, she can’t remember exactly what she did. At first, evidence suggests she slept with Stewart, which ticks off her fiance’, George. However, Stewart clears the air by explaining nothing happened. George forgives Hepburn – but, to her credit, she doesn’t forgive him for jumping to conclusions about her and she cancels the wedding. Then, as she’s announcing this to the guests – Grant, who’s feeding her lines to make the embarrassing situation more graceful, proposes. She accepts, and the wedding goes on – with Hepburn marrying Grant. It’s also suggested that Stewart’s female photographer should marry him, so at least Stewart isn’t left in the cold.

The problem with the film – well, it’s almost like an updated “Taming of the Shrew“. Yes, Tracy Lord is a spoiled, pampered woman who has difficulty expressing her emotions and thus seems to be an ice queen. She compared to a “goddess” several times in the film, and never favorably. However, her abilities at horseback riding, swimming, and sailing suggest she’s a true “outdoorsy” woman – and a woman who doesn’t need a man, she needs to be allowed to do her own thing, probably in a career. I also felt she had much better on-screen chemistry with Stewart’s character, a nearly penniless writer, than Grant’s – who’s also a spoiled playboy. Tracy and Dexter (Grant) had split before because they grew bored with each other, and her coldness drove Dexter to drink (his drying out is a sub-plot of the film), but there’s no reason to believe they won’t tire of each other again. Stewart, meanwhile, is an “everyman” sort, as always, but his honesty would keep Tracy on her toes, and she probably wouldn’t get bored of him. And, should she start to take advantage of him – he’d call her on it. I could also see Stewart prodding her into opening some type of writing or artsy-related business, such as a publishing house, art gallery, or artist’s colony. Not that Tracy’s an artist, but she does have a head for business, and she seems genuinely interested in Stewart’s book, not just flattering him.

There are a couple of misses in the film as well – Tracy’s ill-fated second husband-to-be really should have been played by Ralph Bellamy – we know she’s not going to marry him, the romantic triangle is between Hepburn, Grant, and Stewart, so why not cast the guy who never gets the girl? Howard Hawks would have been a better directing choice – and would have ramped-up the pacing of the film. The scenes with fast dialogue are some of the best, but at 112 minutes the film runs a little long and drags in places. Hawks could have speeded up the dialogue and the plot (such as in his wonderful His Girl Friday).  And, as much as I like Grant – I don’t think the film works with the plot of Tracy Lord going back to her first husband. On the one hand, it makes her look like an on-screen Elizabeth Taylor, and on the other, it seems terribly old-fashioned, almost as if to suggest a woman can’t really be divorced.

Recommendation:  Worth seeing, but at times slow.
Rating:  3 out of  5 Stars
Next Film:  The Princess Bride