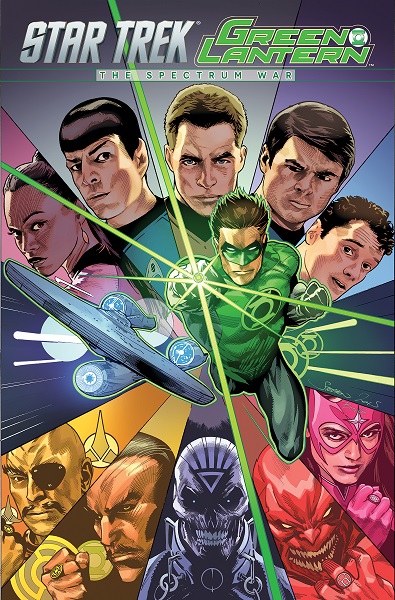 Star Trek Green Lantern: The Spectrum War crosses the 2009 Star Trek movie with Green Lantern. In DC Comics’ continuity this takes place immediately after Blackest Night. Ganthet enacts the Last Light – sending himself, six power rings, and all the living Lanterns to another universe. And that universe is the Star Trek (reboot) movie universe. After enacting Last Light, the Enterprise finds Ganthet’s skeleton on an airless rogue planet. The skeleton is surrounded by the six rings. The away team takes the skeleton and rings to the Enterprise, where Dr. McCoy makes the rather obvious statement that, “He’s dead, Jim,” however, McCoy also notes that Ganthet is from an unknown species. Meanwhile, Scotty and his friend investigate the rings – exposing them to tachyon radiation. This activates the power rings – three find new people to wield them on the Enterprise, while the other three speed off into space. Chekov is chosen by the Blue Ring of Hope. Dr. McCoy is chosen by the Indigo Ring of Compassion. Uhura is chosen by the Pink Ring of Love and becomes a new Star Sapphire. Then Hal Jordan arrives.

Jordan begins to explain what is going on to Kirk and company. Meanwhile, the other rings have also found new hosts. The Red Ring of Rage choses a Gorn. The Orange Ring of Greed (Avarice) chooses a Romulan. And the Yellow Ring of Fear chooses a Klingon. We also discover that Sinestro, LarFleeze, and Atrocitus have arrived in the Star Trek universe. They find the new members of their respective corps, but insist on being in charge of the new ring wielders.

Meanwhile, Jordan knows the three negative rings have found new owners, so he theorizes that any living Lanterns would have been thrust into the new universe. Star Sapphire Carol Ferris arrives with Saint Walker, who is injured. Dr. McCoy attempts to treat Saint Walker. Carol confirms that Nekkon has also made it into the new universe. And Jordan explains to Kirk that the Lanterns lost their last battle with Nekkon through attrition. In the end, his universe was destroyed.

The Klingons, led by Sinestro attack a Starbase – as does Atrocitus and the Gorn. The Enterprise tries to protect the Starbase – and rescue the survivors – but even with the help of the Lanterns, including the few surviving Green Lanterns, the Enterprise cannot hold off the energy weapons of the Yellow and Red Lanterns. After rescuing the survivors of the Starbase, and receiving strange signals from Vulcan – Kirk orders a strategic retreat.

Nekkon has raised Vulcan from destruction, and it’s citizens, including Spock’s parents are now zombies. Both the Lanterns, especially Hal, and the Enterprise crew realize there isn’t much to be done, and Hal fears this new universe will be destroyed like his home one. However, Kirk asks how they defeated Nekkon the first time. Hal tells the story of Kyle Raynor, the White Lantern, who could combine the power of all the rings in the Emotional Spectrum to create the Life Entity who can destroy Nekkon. While Hal destroys Spock’s (zombie) parents for him, Spock then uses the Life Entity to destroy Nekkon. Without Nekkon, Vulcan is again destroyed, as the Enterprise crew watches from space, with the Lanterns. Meanwhile, without any protection from space – the Klingon, Romulan, and Gorn die in space without their rings. Hal, Carol, Saint Walker, and the other Lanterns stay in the Star Trek universe, each making their own decisions about how to fit in in their new home.

This is a very enjoyable book. All the characters are in character, and there is a lot of humor. I really liked how it’s pointed out that Hal Jordan and Capt. Kirk are a lot alike. The art is wonderful, with the characters looking very much like the actors from the Star Trek movies and the DC characters looking just as they should. I really liked the full-page covers and the alternate covers in the back of the book. The only negative is at times, this book feels like there are too many characters, so at times it’s a little hard to follow. But the writing and situations feel very much like those in the Star Trek movie universe, and the Green Lantern mythology is very well explained and handled. Highly recommended.

The World of Flashpoint Featuring Green Lantern is one of a series of graphic novels that flesh-out the characters introduced in Flashpoint the alternative-universe story in which Barry Allen (the Flash) changes time – much to the the detriment of the world – by saving his mother. As with other graphic novels in this series, this one features four stories.

The first story is the story of Abin Sur Green Lantern of Earth – and I loved it. Abin Sur survives crash landing on Earth, so Hal Jordan never gets the Power Ring. Yet the story gives a great back story for Abin Sur, introduces his planet, and has an awful lot about Sinestro too. The Green Lantern Corps is trapped in a war on two fronts against the Black Lanterns on the one side (yes, Blackest Night not only is still happening but it happens simultaneously to Flashpoint) and the Manhunters on the other. As if having two of the worst Lantern enemies tearing the universe apart isn’t enough, Sinestro decides to interrogate Atroicious – which goes about as well as you’d think. The Guardians, being rather concerned with the state of the Universe also only send Abin Sur to Earth for a simple “find-and-retrieve” mission. Abin Sur, who it turns out, is a really nice guy, gets involved in the mess that is Flashpoint Earth. Sinestro tracks him down and well… things happen that I really don’t want to spoil. Needless to say it’s both satisfying and a great story that in a way makes you sad that Abin Sur died in the “real” DC Universe.

“Frankenstein and the Creatures of the Unknown” – This story would make for a great movie on it’s own. During World War II, a scientist discovers a way to turn normal soldiers into the great gothic creatures of Victorian fiction. The main characters would have all died without some form of treatment, including the scientist’s own daughter, who now resembles the Creature from the Black Lagoon. Also in the group are Frank (Frankenstein’s “Monster”), a werewolf, and a vampire. These “creatures” win the war for the Allies, but after the war they are moth-balled in storage. With Flashpoint, the group escape or are released. There’s a considerable amount of flashbacks and flash forwards to explain who the characters are, and where they came from as they search first for Nina’s father and later to find where she and the rest came from. The story has a great feel to it and mixes the modern and the gothic really well.

“Green Arrow Industries” presents us with an Oliver Queen, CEO of defense firm, Green Arrow Industries who’s precisely the opposite of the Oliver Queen we know from the normal DC Universe. This Oliver resembles the pre-Ironman Tony Stark in more than one way. Oliver steals alien technology, meta-human DNA, super abilities, even weapons like Heatwave’s and Citizen Cold’s guns and weaponizes them, then sells them to the highest bidder. His defense plants start in the US, but he’s recently outsourced them over seas to make even more money. This Oliver has eight children (at least) from various wives and girlfriends and knows none of them. It’s even his own daughter who comes after him for not thinking of the consequences of his actions.

“Hal Jordan” tells the story of what would happen to Jordan without the ring. Now a fighter pilot, still in love with Carol, totally unable to be serious enough to tell her so, and basically a guy who acts like Tom Cruise in Top Gun (not a compliment) Hal is a mess. Although Hal is still a hero in that he, and Carol (also a fighter pilot) are fighting hard in the losing war to save Earth from the Amazon-Aquaman war; Hal needed the steadying influence of the Green Lantern Corps and the ability to be part of something greater to lose his innate selfishness. Hal does, though, volunteer to drop the Green Arrow Industries untested bomb on the Amazons. If you’ve read Flashpoint you know how successful that was.

This is a great graphic novel. The art is consistently excellent. The stories are also a fascinating glimpse into what “might hav been” thanks to Flashpoint. For readers of the series it’s a must read.

“He held the first construct, no longer a scribe, now a warrior, the First Lantern.”— Hal Jordan, Narrating

“When you shape the light of your ring, you walk in the footsteps of the First Lantern.”— Hal Jordan, Narrating

Emerald Knights is really six short stories interwoven into an arc-plot. Each of the separate stories are written and directed by different people, though this is part of the DC Animated Universe, so Bruce Timm produces and Andrea Romano is the voice director for the entire thing. The stories are pulled directly from the DC’s Green Lantern Corps comic books. I loved the movie. In many ways, I liked it better than the live-action Green Lantern movie, which was only so-so. This film really showcased the rich history of the Green Lanterns, bringing in several characters and plot lines. And because Hal is telling these tales to Arisia, a new Green Lantern recruit, it’s like he’s explaining the history to the audience. Nathan Fillion does an excellent job of playing an older, more experienced, Hal — who still remembers his younger days and wishes to help a fellow recruit get her feet under her.

The six stories are:

My favorite in terms of pure story was “The First Lantern”, just because it was so awesome to see how the Lanterns first came to be — and I love how Avro wasn’t willing to give up, and thus figured out how the rings were supposed to be used. I also loved the visual image used to show the first Lantern’s ring being handed down from Lantern to Lantern throughout the centuries, and finally to Abin Sur and from him to Hal. That was awesome!

“Mogo Doesn’t Socialize” was amusing. It’s a great story, and probably would have had more impact if I hadn’t had it spoiled for me.

“Kilowog” gives background and a bit more of a human side to the Lanterns’ drill sergeant by showing us his own drill sergeant. Still, it’s the same old “new recruit is terrorized by the drill sergeant but learns to love the tough love approach” story we’ve seen many times before.

“Abin Sur” is weird because it shows he and Sinestro working together, and also the criminal that Abin Sur arrests and jails makes several predictions, which I’m guessing come true in the GL continuity. Abin Sur, of course, doesn’t believe the predictions, especially of Sinestro, his dear friend, going rogue.

“Laira” is probably the darkest of the stories — but it’s fascinating and highly, highly enjoyable. I really liked that one too.

Finally, “Emerald Knights” is the name of the wrap-around story and the finale. Yes, it’s excellent. The entire film is extremely well done, enjoyable, and I just loved it. I highly, highly recommend this movie.

Recommendation: See it!
Rating: 4 of 5 Stars