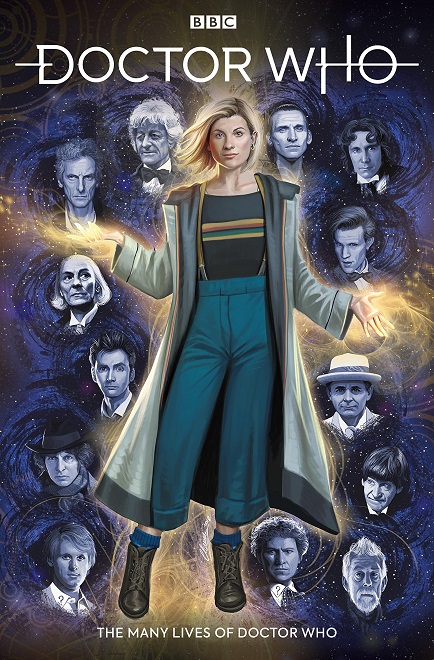 **Spoiler Alert** Doctor Who The Many Lives of Doctor Who” is a series of vignettes and short stories, one per Doctor, plus a War Doctor Story, a story with River Song, and a few pages with the 13th Doctor. Each of the stories adds to the idea of the Doctor regenerating into who she will be, for example, the number 13 comes up several times, though in the Thirteenth Doctor’s pages she mentions she isn’t actually the 13th Doctor. The Fifth Doctor story as the Fifth Doctor, Tegan, Nyssa, and Turlough in the cloisters on Gallifrey where they are supposed to be chasing down a renegade Time Lord. But when they find him, he talks the Doctor into helping him use some Gallifreyan tech so he can regenerate. The Doctor agrees, and the other Time Lord regenerates into a woman. We also see both the fourth Doctor, with Romana and the Seventh Doctor, with Ace, solving a problem by meeting someone earlier, which they will do after they did it. The graphic novel itself is very short, and some of the vignettes are only a few pages, while others are full, albeit, short stories. I enjoyed this graphic novel though, and it whetted my appetite for the next two graphic novels in Titan Comics 13th Doctor series. The only flaw in the book is it’s almost too short. Recommended. 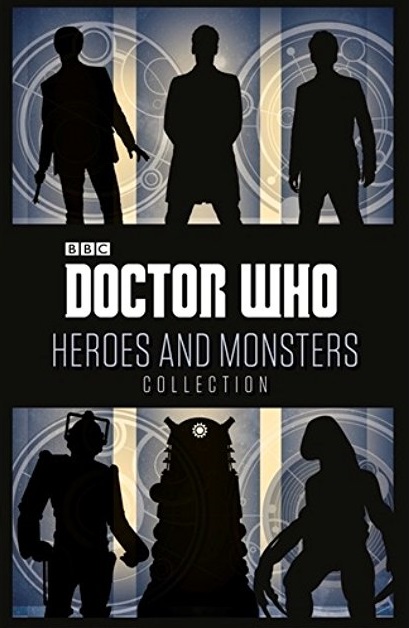 Doctor Who Heroes and Monsters is a collection of short stories featuring the Doctors from New Who. There’s a single War Doctor story, several stories each with the Ninth Doctor, Tenth Doctor, Eleventh Doctor, and Twelfth Doctor. There’s a pair of stories taking place at the same time and place – one of which is from Amy’s point of view on her solitary adventure and one from Rory’s on his only solitary adventure.

The problem is that though some of the stories are good – many are only so-so; and, nearly all of them read like they were written for children – not even young adults, but children. And it’s the type of children’s literature that, unfortunately, looks down on the child’s abilities to read, comprehend, and follow a good story – so the stories are overly simplistic instead.

The Amy-Rory pair of stories is one of the better sets. The Doctor lands the TARDIS on a giant shopping mall planet. Amy goes off on her own, and through kindness to a young boy, stops an invasion. However, the young boy is in his position due to a strange man, whom we suspect to be Rory. The next story in the collection shows us events from Rory’s point of view. I enjoyed that device for the pair of stories, however, it is a fairly simple story nonetheless.

The last story in the collection is a solo Twelfth Doctor story, which, while fun, and a bit less child-oriented, still has a predictable bent to it.

Overall, I was disappointed. Yes, it’s a quick read, but I’d rather have a bit more depth to my Doctor Who tie-in stories.

Leave a comment Posted on May 29, 2017 Book Reviews, Doctor Who, Reviews

Engines of War is the War Doctor’s story, though most of it is told from the point of view of Cinder, a young, female, Dalek Hunter on the planet Moldox. The Doctor leads a fleet of Battle TARDISes into battle against the Daleks near the Tantalus Eye, a maelstrom of temporal energies. However, the Time Lord fleet is ambushed by Dalek Stealth Ships and the Doctor’s TARDIS crash lands on Moldox. There he meets Cinder, and discovers the Daleks working on a horrific new weapon. He and Cinder go to Gallifrey to warn the Time Lords – only to discover that Rassilon is willing to use an even more horrifying weapon to stop the Daleks. Soon it is up to the Doctor and Cinder to find a way to defeat the Daleks without using the Time Lord Doomsday weapon, and without allowing Rassilon and his Time Lords to use it either.

Engines of War is the War Doctor’s Story (as played by John Hurt in “The Day of the Doctor”) and satisfactorily explains why he made the terrible choice he was forced to make. And it introduces as a one-off companion, Cinder, a young woman who’s entire life was torn apart when the Daleks came to her world. The novel is a quick read, written without difficult vocabulary, and very much has that “young adult” feel to it. It moves quickly. I enjoyed it, but I find it has the same problem as other books in the Doctor Who New Series Adventures range – it’s written for teens, and is not challenging to an adult reader. Not only that but it doesn’t have the crossover appeal of other fantasy or science fiction young adult literature (such as Harry Potter). Previous Doctor Who series of original novels such as the Missing Adventures, the New Adventures, the Past Doctor Adventures and the Eighth Doctor Adventures were more “adult” in nature. Not, obviously “adult” in the sense of an R or X-rated movie, but they weren’t G-rated kids-only entertainment either. I liked the more complex storylines of the other ranges.

Still Engines of War was a good story, and I did enjoy reading it.

Titan Comics Doctor Who: The Then and the Now starts off it’s collection of the second year of their adventures of the Eleventh Doctor as played by Matt Smith on the BBC television series, and his companion Alice Obiefune. This story mentions the Time War and glimpses of the War Doctor (as portrayed by John Hurt) occur throughout the book. But I was expecting to see the Eleventh Doctor and the War Doctor meet – or at least a full flashback and that didn’t happen.

However, even though at times the story was confusing, and it ended on a cliffhanger, it was still a good book – exciting, with excellent characterization, and beautiful art.

This story also brings in Abslom Daak from Doctor Who Magazine and is used with permission. Daak’s a chainsaw (chain sword) wielding Dalek-killing mercenary – and an odd choice for a one-time companion.

I think this story will be interesting once it gets going, however, this particular story felt like a very confused beginning, and it had no end because of the cliff-hanger. I’m thinking that Year 2 for the Eleventh Doctor will be like Year One, in that it’s mostly a single story. 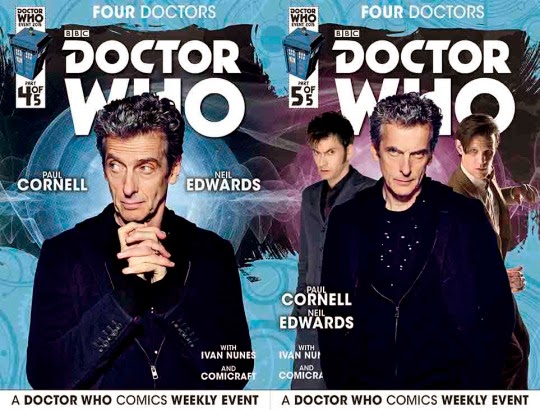 The Four Doctors Event is a five-issue comic mini series written by Paul Cornell and published by Titan Comics. I know I first heard about this series from social media, I think on Twitter. Anyway, I was very excited about it because I really like Paul Cornell’s writing (Cornell writes the Shadow Police urban fantasy series, see reviews on my GoodReads page) – and I thought it was great to see him back to writing Doctor Who. Titan Comics is a new publisher for Doctor Who Comics and they definitely get Doctor Who. I’ve now read several of their graphic novels (collections of the soft cover series) and the art is always excellent, and the stories very much in the tone of New Who. Again, see my GoodReads page for specific reviews of the various titles I’ve read so far.

The art in the Four Doctors Event is excellent. The panels have a painted almost watercolor look, and the edges of figures are sharp and crisp. I like my comics art to be realistic and the panel order to be clear – and that’s precisely what the Titan Comics give me, including this series. But it’s also gorgeous and I really like the painted look.

Doctor Who has had multiple-Doctor stories before in both the Classic and New aired series, namely “The Three Doctors”, “The Five Doctors”, “The Two Doctors”, and the 50th Anniversary Special, “The Day of the Doctor”. These stories have been hit or miss – I loved “The Day of the Doctor”, and I enjoyed “The Three Doctors” but I felt the plot of “The Five Doctors” was more a series of cameo appearances than a good story and “The Two Doctors” was just too long and slow-moving. But the Four Doctors Event has a great story that takes advantage of several versions of the Doctor (the Tenth, Eleventh, Twelfth and briefly the War Doctor). There were several surprises in the story that I don’t want to spoil, so I won’t – but it is a good story and well-written.

The only disappointment I had was that The War Doctor (John Hurt’s character in “The Day of the Doctor”) only appears at the very beginning. I kept expecting him to return, but he didn’t. The Ninth Doctor also isn’t in the story, except a very brief cameo at the end – but the explanation for his absence is brilliant! Overall, this story was excellent and had the same feel as “The Day of the Doctor” without being quite so bonkers at times (No “little girl” Elizabeth the First this time around) but it also wasn’t as grim as some stories I’ve read by Cornell. Not that there’s anything wrong with grim, I like grim – at times; but this mini-series had just the right New Who attitude, so I enjoyed it very much.

I normally never buy things twice, but I plan to purchase the Graphic Novel version of this story when it becomes available in January 2016. This comics mini-series (and no doubt the graphic novel) is highly recommended.