I enjoy watching and collecting television on DVD, as the large number of reviews on this blog can attest. There are certain advantages to watching any television show on DVD. I usually watch one series at a time, watching the entire season (or DVD set), in order, and then reviewing it. Back in the day, before DVRs, before DVD, before Blu-Ray, I actually often did see a lot of programs “stripped” in daily syndication. That meant the program was shown, every day, at the same time, Monday through Friday. Weekend syndication meant the show was shown every week at the same time on Saturdays and Sundays or on just Saturdays or just Sundays. It would become a habit to watch the same show every day at a certain time. Not that I couldn’t miss it to do something else occasionally, but it was common. So, I find I can concentrate on a series better, and pick-up more, when I watch all of it at once – or at least a full season. Watching a show on DVD (or Blu-Ray) means I can see the entire thing, in order, in good quality, without missing anything due to pre-emptions for sports or due to bad weather. Writing reviews gives me blog content, but it also, like my book and audio play reviews, it is a way to process what I’ve seen before moving on to the next show. I also get a sense of satisfaction from finishing a DVD season set, and I really get a sense of satisfaction from finishing a TV series. It’s the same sense I get from finishing a long novel or a thick non-fiction book.

When I started purchasing DVDs, I was only buying the programs that I really liked. Either older ones that I remembered watching, or the previous season’s shows that I currently enjoyed. But now it’s different. Now I buy a mix of shows that I have previously seen, such as classics I remember watching in syndication or even when they first aired or current shows; and shows that I haven’t seen at all. Because DVDs and even Blu-rays are relatively inexpensive – I now often try out a series that I haven’t even seen based on recommendations from friends, reviews and chatter online, even people tweeting about it! (such as Game of Thrones, Ms. Fisher’s Murder Mysteries, Call the Midwife, and I plan on trying Yuri on Ice at some point). If a friend likes something, I reason I might like it too. If there’s a lot of chatter on Twitter or Facebook or on entertainment websites (Hollywood Reporter, The Mary Sue, Bustle) about the show, I may want to see what the fuss is about. And I have seen friends on Facebook actually ask for recommendations for what to add to their Netflix queue. I can’t do Netflix for technical reasons that don’t bear exploring at this juncture, but when half a dozen friends rave about how good something is – I take notice. That’s how I found Ms. Fisher’s Murder Mysteries, which I do like and I plan on buying the remaining seasons when funds allow.

If I have never seen a show, my one rule is I only buy the first season to start. That way, if I watch the season and it’s not to my taste, well, I’m only out the $20-$30 or less that it cost to buy the season. And I can always sell or give away the copy. And if I like what I see, I often will go ahead and purchase the rest of the series that’s available and start watching it with the next season (iZombie) or add it to my “must buy” list (Outlander – because even if I was willing to add another premium pay station for one show – my satellite system doesn’t carry Starz).

Also, television these days is being written for the DVD/Blu-Ray market. In part because of shorter running times on commercial stations, and because some network executives actually have realized that the audience is smart enough to follow a series from week-to-week and thus they can do a continuing story – a lot of series play better on DVD. Game of Thrones is the ultimate example of this, as it’s a complicated story with dozens of characters and locations and each episode is like a chapter in a novel, rather than something stand-alone. But the superhero shows on the CW also, probably due to running length, work just like the books they are drawn from. They are continuing story lines. And also, like DC Comics, periodic crossovers are a staple. As is bringing in guest characters. Much more so than the DC Extended Universe films – the DC Shows on the CW really do give you the feeling of watching a DC book. Reading the monthlies (or as is the case now – the biweeklies) and watching the weekly shows – really are very much the same in feel. And, like their printed counterparts, each season builds on the previous one. In this aspect, watching a show on DVD in some cases makes more sense. When I watch a show on DVD (or Blu-Ray) I usually watch at least one episode per day, sometimes more if it’s the weekend or I have a day off. This compresses a show a lot. Many of the cable stations, both commercial and premium run short seasons. A sixteen-episode series I can watch in a couple of weeks. A ten-episode series often in a single week. Even a traditional “full season” of 22 episodes I can watch in less than a month usually. So something that runs an academic year (September through May) I can watch – in a month. It is inherently faster. And I get a sense of satisfaction from finishing off a season or a series.

There is one major drawback to DVD though. Watching television is no longer a communal event. We no longer have everyone watching the same thing at the same time. It’s out of sync. If I watch something two or three years after it originally premiered – I’m going to miss out on the Internet activity about that show. The smarter networks are trying to counter this – with live-Tweet events, contests, and contracts that require their actors to be on Twitter promoting the show when it’s on. But if you miss all that – it’s gone.

And the days of fans all being attracted to the same show at the same time are also more or less gone. In a sense, if you watch most of your television via DVD (or Netflix or On Demand I’d guess) it’s almost more like reading books in terms of finding fellow fans. You experience the media product separately. But you still want to come together with fellow fans to talk about it and burble happily.

This is compounded for series from the past, especially series from over a decade ago. I often found great shows of the past (Wild Wild West (weekend syndication); The Man from UNCLE (daily syndication); even classic Star Trek (weekend syndication)) through re-runs. Today, there is very little in the way of re-runs. Most of the cable stations are running original programming – and they program to very specific audiences. This is a double-edged sword. The breadth of the new broadcasting landscape means that more audiences are served, there are more opportunities for writers, directors, producers, and actors (as well as below the line talent), and more audiences can find what they want to watch. But it also means that, with very few exceptions, there are no longer shows that “everyone” watches. Which also means, younger audiences are not even being exposed to the “classics” of television. Some one who is, say 30, might see the new Man from U.N.C.L.E. movie because they like the cast, or the director, or even because the trailers looked cool – without ever having seen an episode of the original series. And they really have no incentive to watch it. This isn’t young people being “stupid” – it’s just how it is. If you were born in the late 60s, how much incentive did you have to watch the Westerns that your parents liked? Did you enjoy the endless re-runs of The Big Valley and Bonanza? I know I was completely turned off to Westerns as a genre, as a kid, and I had no desire to watch any of the ones that my Dad liked. But I watched every spy show I could find running in syndication: The Man from UNCLE, I Spy, Get Smart, and even James Bond (though those were movies – I vividly remember watching every single one on HBO when we first got cable when I was a kid and I lived in a much more urban area than I do now). I even watched all of the British series The Prisoner and a little bit of The Avengers (the British spy series starring Patrick MacNee and Diana Rigg), and when I was a bit older, The Saint (starring Roger Moore) on A&E. But people who are in their 20s and 30s today – they have no opportunity to watch any of those shows. They aren’t being run in syndication. And, as I pointed out, few people would seek them out when there are so many other entertainment choices out there.

This is one reason why I post reviews of everything or nearly everything I watch as I watch it – no matter when it was made, not just the new stuff. It’s an opinion on a show made in a time with some context to that time, that might just interest someone who either hasn’t heard of it or, more commonly, has heard of it but never seen it. Just like I will take a chance on something my friends rave about that I haven’t seen.

Yes, I assembled this list and posted it myself. I did not make the “Quote-cloud” pics, I found those on Facebook, I think, but I do think they are awesome! 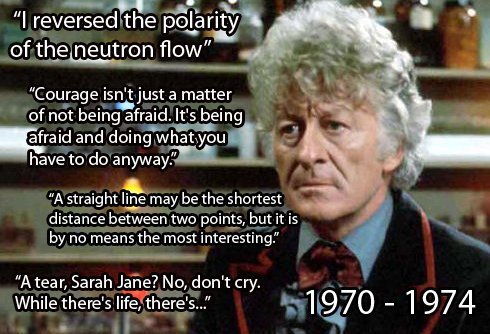 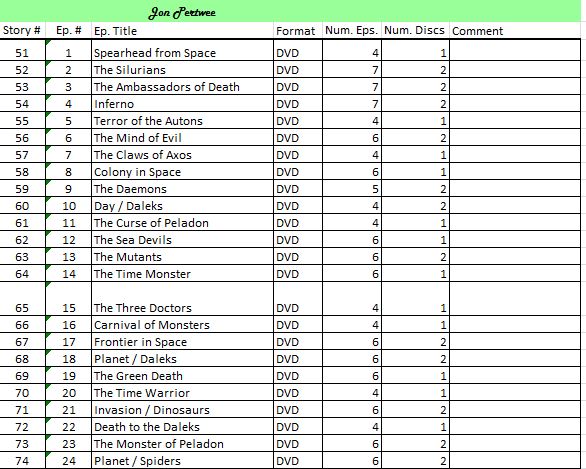 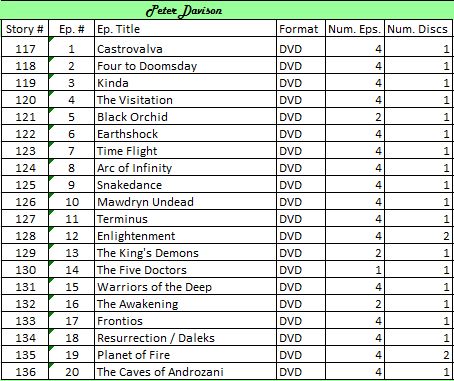 A note about Colin Baker – during his tenure as the Doctor, the BBC changed the format a couple of times. His first story, The Twin Dilemma, is four half-hour parts – standard for Doctor Who. However, for the rest of the season, they changed the format to 45-minute “episodes” but stuck with the multi-part format. Therefore, Attack of the Cyberman (as well as the rest of the season)  is two 45-minute parts. However, the total length of the stories is roughly the same as the more traditional format, that is, two 45-minute parts equals four 30-minute parts; both are roughly 90 minutes.

Colin’s second season returned to the 30-minute parts format, but it was an umbrella story line called, “The Trial of a Time Lord”.

After a hiatus, Doctor Who returned with Sylvester McCoy as the Doctor, the format returned to multi-part stories with 30-minute episodes.

The BBC cancelled Doctor Who. Years later, it returned as a movie, co-produced by the BBC and FOX Broadcasting in the US. 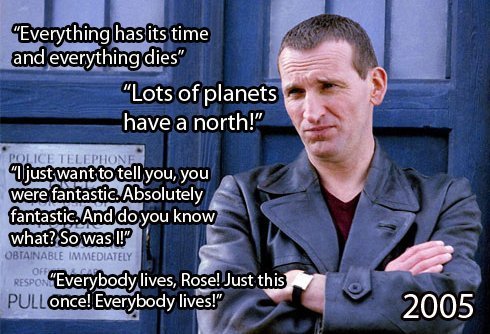 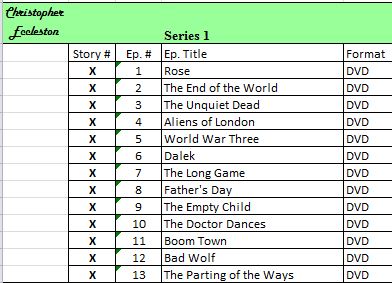 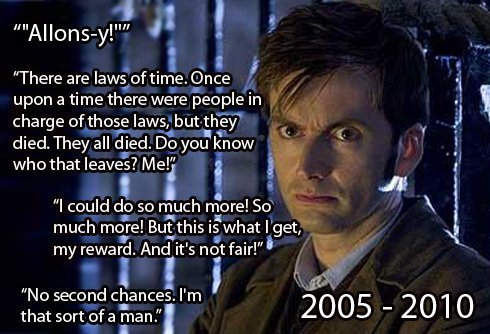 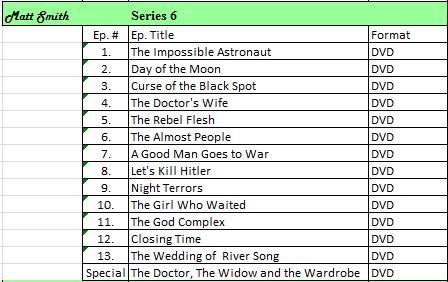